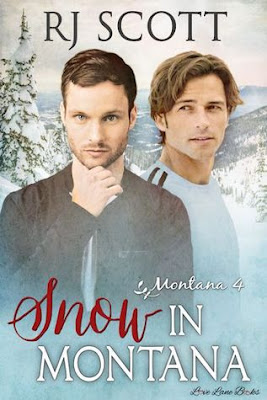 An actor in the closet, a sheriff in love, and memories that won’t stay hidden.Jordan Darby is known as the King of Christmas. The star of eight made-for-TV Christmas movies, the leading man who always gets his girl. Filming at Crooked Tree Ranch in Montana, in the ice and snow, Jordan is fighting to make a go of his new company and dealing with fears of exposure over one huge secret. After all, who the hell would buy into him being a romantic straight lead if rumors about him being gay were proven to be true?Sheriff Ryan Carter is advising on the new movie being made at Crooked Tree. He hoped this would be one day of work and nothing more. Until, that is, he meets the hero. But while Jordan is sexy, he’s also very much stuck in the closet—everything that Ryan doesn’t need in his life. And then lust becomes part of the equation, and Ryan’s quiet life is thrown into turmoil.Their story unfolds against the chaos that overtakes the ranch, with Adam regaining memories that terrify him and make him look at Justin differently, and Justin leaving the ranch to make things right. Only through trusting in love and friendship can Justin and Adam learn to look to the future instead of letting the past destroy everything. But will they ever see clearly enough to do that?

Snow in Montana, the fourth book in RJ Scott's Montana series, is awesome. Listed as being able to read as a standalone, I am glad I read the previous books, as each book definitely expands on past events and past characters.

Jordan arrives in Crooked Tree Ranch to film his latest movie. A B-list actor, Ryan is hired to arrange the proper protection for the man. Let the romance begin. As I love stories of closeted actors, this one is right up my alley.


As Jordan and Ryan meet while Jordan's in town to film, the sparks fly and they start up a six week fling. In their time together, the learn about each other's worlds, which are extremely different. They also find love and discover what it is to be loved.

The problems of being a closeted actor are well explored, as Jordan struggles with coming out, and the threats of being outed. And, of course, his upcoming departure. I never really expected to love Ryan, who we met in the past, but I do, I really, really do. And being with Jordan is just perfect.

More bonus points because Jordan's filming a Christmas movie. Think Hallmark movie, of which I'm a fan, and this is just a lot of giddy fun.

Exploring more on Adam and Justin, Adam's struggles are extremely tough to read. And the mystery around Justin's absence continues as he's still confused about his missing time and thoughts. Both men are not done with their stories yet.

RJ Scott's Montana series is entertaining, focuses on family, and full of atmospheric descriptions. Snow In Montana wonderfully adds to the fun.