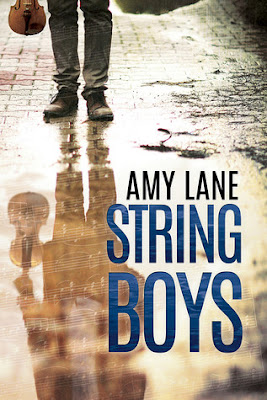 Seth Arnold learned at an early age that two things in life could make his soul soar—his violin and Kelly Cruz. In Seth’s uncertain childhood, the kindness of the Cruz family, especially Kelly and his brother, Matty, gave Seth the stability to make his violin sing with the purest sound and opened a world of possibility beyond his home in Sacramento.Kelly Cruz has loved Seth forever, but he knows Seth’s talents shouldn’t be hidden, not when the world is waiting. Encouraging Seth to follow his music might break Kelly’s heart, but he is determined to see the violin set Seth’s soul free. When their world is devastated by a violent sexual assault and Matty’s prejudices turn him from a brother to an enemy, Seth and Kelly’s future becomes uncertain.Seth can’t come home and Kelly can’t leave, but they are held together by a love that they clutch with both hands.Seth and Kelly are young and the world is wide—the only thing they know for certain is they’ll follow their heartstrings to each other’s arms whenever time and fate allow. And pray that one day they can follow that string to forever… before it slices their hearts in two.
Review
My Rating - 5 Stars!

An extraordinary tale of family, of heartache, and of healing, it's tough to explain how emotional Amy Lane's String Boys really is.

Seth and Kelly's love story covers many, many years of complications and separation. There's pain, love, betrayal, and more family issues than one could ever imagine. The struggle with loss and grief, blame and expectations, let downs and responsibilities.

It wonderfully explores the struggle of coming out, dealing with extreme homophobia, the spiral of drugs, and the hatred that comes with some religions.

It's full of complex characters, all of whom contribute to the storyline greatly.

And pretty much everyone suffers. There's an extensive exploration of family, both the highs and the lows. The way family can have excellent influences, as well as huge let downs and betrayal. The utter tragedy of having other's affecting one's life and decisions. The relationship the boys have with their fathers is so damn touching. The good, the bad, the tragic.  All of it makes for emotional scenes that will hit you hard.

The love between Seth and Kelly is absolute and unconditional. The sex scenes are great, not so much on their actions, but in their depth of emotion. The love and tenderness is clearly displayed.

Ultimately it's a story of hope and overcoming all the obstacles.

Please note that there's a rape in the story. It's off page, but some of the effects of it are detailed. Skip this one if that's a trigger for you.

Obviously the writing is fantastic if the story can affect me this much. Despite the slow-ish pace, the character development is accomplished, and feelings jump off the page. I love this story. I wish I could give it 10 stars. Intriguing from the start, it's not until later that the twists and turns just  punch you in the gut, leaving you unable to put it down.

The storyline is superb. String Boys is a must read in my book. This is one of those amazing books that leaves me wanting to thank Amy Lane for writing it, as well as yell at her for writing it. If you read it, you'll understand.