You Belong With Me by J.R. Loveless 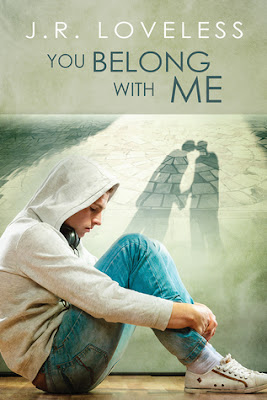 Scott has been in love with his best friend Craig for years, but watching Craig with his manipulative boyfriend has worn Scott down, and he knows he needs a break from the pain and maybe a change of scenery and perspective. His twin sister, Karen, convinces him to spend a summer in Paris.Karen is sick and tired of seeing Scott suffer, and she’s not going to stand for it anymore. She confronts Craig and tells him what he’s been missing by spurning Scott’s affection in favor of a jerk who mistreats him.When Craig unknowingly breaks Scott’s heart, Craig opens his eyes—and his own heart—to the possibility of a future with Scott. He plans to use the time while Scott’s abroad to orchestrate a romantic surprise that will show Scott they belong together. But when he sees Scott with another man at the airport, Craig fears he’s too late.
Review
My Rating - 4 Stars!

An avid fan of young adult romances, JR Loveless' You Belong With Me is right up my alley. It's a good little high school romance between best friends, Craig and Scott.

It's got the classic best friend secretly in love with his best friend thing going on. Add in some selfish acts, and we have a broken heart. I love the feel of this one, as you can feel that things will be ok, but in the meantime, we get a whole lot of pain and hurt to deal with first.

As for the story itself, there's a manipulative boyfriend added to the mix, a extremely oblivious Craig, and some nasty actions. I also enjoy the way the relationship is resolved. Instead of instant forgiveness, we get a good story of protecting one's heart, with an earned ending. Seriously, I would have been furious if the selfish actions had been easily forgiven or forgotten.

The only thing I found a little off-putting is the third point of view that we get from Scott's sister. Her viewpoint adds to the story, of course, but it just seems odd.

If you enjoy feel-good, quick young adult romances, be sure to check out You Belong With Me. With just 75 pages, it's a short little treat with some good emotional angst.