The Sinner and the Liar (Seeking Asylum #1) by Alice Winters 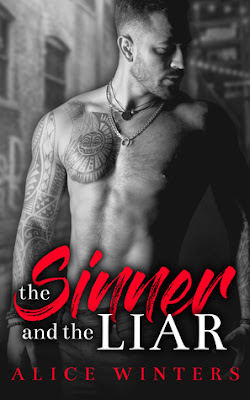 Sin is a hard man caught in a crumbling city filled with crime. After losing the love of his life, Sin feels like he has nothing left to live for. Drifting through life, he takes on mercenary jobs by day and drinks away the memories of a happier time at night. Life has no color and little direction until he saves a gorgeous young man from a vicious attack. Sin doesn't trust anything that's too good to be true, but resisting the determined and seemingly innocent young man presents the first challenge Sin has had in ages. Eastyn brings brightness and humor to Sin’s previously dark and grim world, but there’s far more to Eastyn than he lets on.Eastyn is trapped, a victim of circumstance, and he wants only to find a way out. He gambles everything to bend one dangerous man to his will in order to escape another. Falling in love was never part of that plan, but Sin gives him something he’s never had before: hope. With Sin, he suddenly has the power to become the person he has always wanted to be. He feels like he finally has a chance to escape, but how far is he willing to go to get what he wants?In a fractured city poised between order and chaos, two men find in each other the last things either expect to find: friendship, acceptance, happiness, passion, and the chance at love stronger than the evil that surrounds them. But claiming and keeping that love will be the riskiest thing either of them will ever have to do. As a gang threatens to overtake the city, Sin is forced to decide if he will remain stuck in the past or open his heart to the man who has found his way into his life. Because Eastyn is unlike anyone he’s ever met before, and he might be the very thing needed to save Sin from himself.The Sinner and the Liar is a 107k word gritty romance with a side of humor set in the wreckage of a city recovering from war. It has two heroes who refuse to give up, even when they should, snarky dialogue, steamy sex, and a love that is strong enough to overcome even the most impossible of odds.


Alice Winters' The Sinner and the Liar is a fantastic raw and gritty thriller, full of murder and lies. The author pulls no punches with topics such as owning people, auctioning people, and abusing them.

Sin and Eastyn find love through the strangest of ways. They're in a no-win situation as they face danger as Sin tries to save Eastyn. Definitely a strange combination of men, they have extremely different pasts. One's never known love, and the other's terrified to love again.

A darker Alice Winters tale, it still has wonderful moments of humor, snark, and banter. Eastyn and Sin are a wonderful couple. They have no business being together, but they definitely are perfect for one another.

Overall, I absolutely love The Sinner and the Liar. As I've come to expect from an Alice Winters's book, the action is non-stop and extremely fast paced. In addition, the author manages to create bad guys who are loveable, as Eastyn and us, the readers, fall in love with a murderer.