Honeymoon Sweet (Out & About #2) by Allison Temple 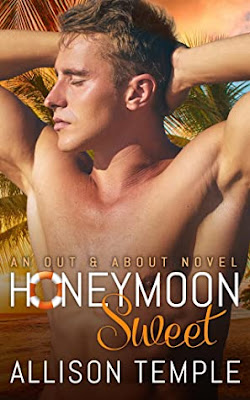 Doug is a cheese pizza kind of guy. A honeymoon cruise around the Caribbean is the most adventurous thing he’s ever done. Going on that honeymoon alone is unthinkable, but here he is, with a luxury suite and a broken heart.Tripp is a hopeless romantic. He’s in a sinking relationship that’s been taking on water for months. He’d throw in the towel if he had one, but he’s naked and locked out of his room.No one should be on a cruise alone, and Tripp has a simple solution: he and Doug will pretend to be husbands and enjoy everything a week of sea and sun has to offer. But as the days and nights heat up, can a cheese pizza kind of guy be brave enough to give love a second chance?Honeymoon Sweet is a 63k contemporary MM romance. It’s sweet enough to require a trip to the dentist, and hot enough you’ll need a swim to cool off when it’s over. HEA guaranteed.

Honeymoon Sweet is a beautiful, feel good insta-love romance by Allison Temple. The second book in her Out & About series, it's perfectly delightful.

Doug and Tripp are two men who both thought they were happy. Ends up they were both wrong. One was left at the altar. The other is suddenly realizing that his relationship is one that is really only friends with benefits. The result is a fake fiance relationship story that is charming as can be.

Doug and Tripp are two men who could easily fall in love, but it doesn't seem possible. Or real. After all, can you trust insta love?
The writing style is fantastic, instantly pulling the reader in, and keeping them intrigued throughout. The storyline and character development is both entertaining and riveting. There is plenty of humor, including some ridiculous nicknames that had me laughing throughout.

Honeymoon Sweet is a romance of self reflection and self growth. Allison Temple had me soothed and happy throughout this story of second chances at love. This story of finding someone who loves you as you are is perfect when you're in the mood for a easy, yet fulfilling read.