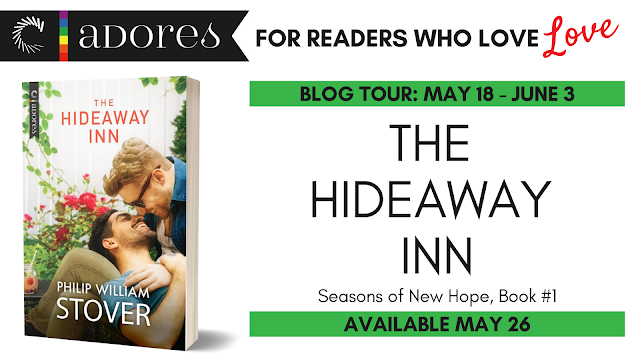 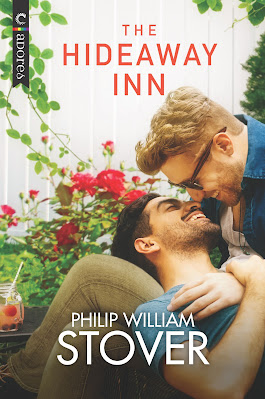 High school wasn’t the right time or place for their relationship to grow, but now, fifteen years later, a chance encounter changes both of their lives forever.

No one in the charming river town of New Hope, Pennsylvania, needs to know that Vince Amato plans on flipping The Hideaway Inn to the highest bidder and returning to his luxury lifestyle in New York City. He needs to make his last remaining investment turn a profit…even if that means temporarily relocating to the quirky small town where he endured growing up. He’s spent years reinventing himself and won’t let his past dictate his future.

But on his way to New Hope, Vince gets stuck in the middle of nowhere and his past might be the only thing that can get him to his future. Specifically Tack O’Leary, the gorgeous, easygoing farm boy who broke his heart and who picks Vince up in his dilapidated truck.

Tack comes to the rescue not only with a ride but also by signing on to be the chef at The Hideaway for the summer. As Vince and Tack open their hearts to each other again, Vince learns that being true to himself doesn’t mean shutting down a second chance with Tack—it means starting over and letting love in.

One-click with confidence. This title is part of the Carina Press Romance Promise: all the romance you’re looking for with an HEA/HFN. It’s a promise!

That summer Vinny would come by and see me almost every day, usually with a new book. I loved hearing him talk. He described the spiritual journey of Siddhartha, the complicated plot of King Lear and even read some of James Baldwin’s poems to me that were so riveting I almost hammered my finger to a post. At school I was in a class called “Reading Foundations” and even I was smart enough to know it was for kids who were barely passing. I never felt dumb around Vinny. He treated me like I was just as smart as he was and after hanging out with him for a few weeks, I started to believe it.

Being alone with Vinny was easy. We were so different but also had so much in common. My mom died when I was a kid and he never knew his father. I never talked to anyone about not really having many memories of her and wanting more. He only had a single picture of his dad and never wanted to know more. We fit like opposite pieces of a puzzle that click when joined. Being alone together at the edge of the farm felt like freedom. But when the fence was done and school started, the world shifted back to where it was and whatever we had evaporated.

A small-town high school is a network of territories with strict borders. Vinny didn’t belong anywhere and it made his life miserable but it made me admire him more because he didn’t need to. He did what he wanted, how he wanted to do it.

My life felt like an endless list of obligations. I followed some script then and I don’t even know why or where it came from. I had to place at the meets, have the hottest girlfriend, drink like an animal at parties on the weekends. These things were expected of me or I expected them of myself. At the time I couldn’t tell the difference. I couldn’t imagine a life being anything other than the one that was already attached to me, but meeting Vinny put a crack in that heavy iron chain.

Once school started, Evie came back from her summer job down the shore, football practice began and chores on the farm took over my life. At least, that’s what I told myself. I couldn’t find a way to make Vinny part of my life beyond that summer without making my entire world explode. I ignored him at school, pretty much, even though alone in bed at night I couldn’t stop thinking about him. I kept those worlds separate because they seemed to be in completely different orbits. It was a shitty thing to do. I know it now and I even knew it then.

I left The Hideaway mad as hell at Vinny—or rather Vince—for the way he treated me in the kitchen, but the truth is I deserve everything he said to me and more. How could I ever get him to understand the choices I made back then and why I made them? How could I explain to him how hard I have worked to undo everything I did back then? Then I remember how I already started on the wrong foot. He asked about Evie and I went all mysterious and vague. I should have told him we got divorced. I should have told him that we still co-parent a wonderful, funny six-year-old. I should definitely have told him that I finally came out as bi. But picking him up on the side of the road was such a confusing surprise that my brain wasn’t functioning at full capacity.

Philip William Stover splits his time between Bucks County, Pennsylvania, and New York City. He has an MFA in writing and is a clinical professor at New York University where he is the former chair of the writing curriculum. As a freelance journalist, his essays and reviews have appeared in Newsday, The Forward, The Tony Awards, The Atlanta Journal-Constitution, The Houston Chronicle, The Milwaukee Journal Sentinel, and other national publications.

Philip grew up tearing the covers off the romance novels he devoured so he wouldn’t get teased at school. Now he enjoys traveling the world with his husband of over twenty years and sitting in front of the woodstove with their half-Bassett, half-Sharpei rescue pup and he would never consider defacing any of the books he loves.

He is thrilled to be returning to romance and loves to write cozy, warm-hearted stories served by hairy forearms with a side of fries. He can be found on social media as Philip William Stover.

A new Carina Adores title is available each month: