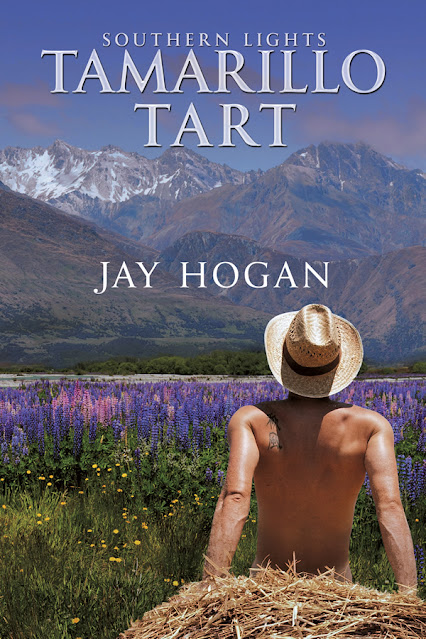 Amazon US Link - Available in KU

CASSIDY MARTIN is a country boy through and through. He loves his horses, his Lord of the Rings tourist business, and his isolated paradise at the foot of New Zealand’s Southern Alps. Not that everyone appreciates the seclusion he craves. Take his ex-wife for example.

The sexy-as-hell guy on his latest tour might be whip-smart and push all of Cass’s buttons, but he’s about as country as a pair of Louboutins, and Cass has been there and done that. Broken heart with the T-shirt.

STEFAN HAMILTON doesn’t do ‘outdoorsy’, he’s a city boy, born and bred. The closest Stef gets to the country is ‘Cowboy Night’ at his favourite Auckland gay bar even if the music makes Stef want to rip his hair out by the roots.

But Stef is also a hardcore Lord of the Rings fanboy. So, when he gets the chance to go on a horse trek to the iconic film locations in the Southern Alps, he sucks up his fear of the gigantic animals and his allergy to camping for the chance to let his nerd flag fly. But when his mate pulls out at the last minute, Stef is left to negotiate the horses, the wrath of mother nature, and an inconvenient crush on the cowboy leading the tour.


Tamarillo Tart, the second book in the Southern Lights series by Jay Hogan, is another fun romance set in the wonderful atmosphere of New Zealand. It did take me a while to get into this one though.

This is the story of complete opposites, which is a lot of fun. Steph, a city boy, is taken by Taz upon first sight. And let's just say Steph is like a duck out of water on this adventure. His phone calls about such will leave you laughing. Oh how I love Benny, Steph's brother. He's so damn lovable and sweet with his honesty and openness.
This is a story of city boy meeting country boy and falling in love. Cas, a country boy through and through, isn't looking for a relationship. He's been keeping his bisexuality a secret,  but he certainly can't resist the adorable Steph.
The following quote is awesome, something everyone can relate to. "I'm pretty sure everyone feels like a fraud at some point, no matter what they do."

And the setting, wow. Having been to New Zealand, I find the beauty of the land to be a welcome read, and very atmospheric.
I like Tamarillo Tart but I couldn't become as consumed by it as I wanted. I like it but I found it a little slow at times.

Look Stef, Ethan promised the horses are nice—they’re not going to bite you. Cass will set you up on the beginner’s one. It’s only a few hours in the saddle the first day—”

“—then an overnight at some historic shepherd’s hut and back down the next day. And just think, you get to see the Lothlorien forest, the Ithilien camp site, Isengard, the Misty Mountains, the filming location for the refugees of Rohan, and loads more. Come on, you must be gagging for that.”

Stef’s raked his eyes over the mouth-watering man standing opposite. He was certainly gagging for something. “Maybe. Not that I’ll be able to enjoy any of it because I’ll have left half the skin of my arse on the fucking saddle.”

The sexy cowboy shook his head in amusement.

“You sure this Cass can be trusted?” Stef eyeballed the man in question, well aware he could hear everything Stef said.

Cass smirked and it looked good, too bloody good. “Standing right here,” he pointed out.

“Oh. My. God. Was that him?” Tanner asked in disbelief. “Please tell me you’re not having this conversation where he can hear you.”

“Every damn word and you still haven’t answered me. I want him to know you’ll sue his fine arse to hell and back if he tries to put me on anything that even remotely looks at me sideways.”

That earned him a rumbling belly laugh from Cass who then spun on his heel, and waved Stef to the passenger seat. “Get in princess, or we’ll be late. I won’t let any harm come to you from the nasty-wasty horses. Nice to know you like my arse, by the way.”

Cass made his way to the driver’s door and got in, leaving Stef’s jaw on the floor…again. What the hell?

Tanner choked back a laugh.

Stef narrowed his eyes and lowered his voice to Tanner. “Is this dude gay? Did you guys fucking set me up? If you think for one minute—”

“We’re not setting you up. And I have no idea if he’s gay or not. What the hell does it matter anyway? Hang on—”

Stefan could hear Ethan chattering in the background before Tanner came back on.

“Ethan says Cass isn’t gay. He was apparently married for a while, to a woman—”

“Just go on the damn tour for fuck’s sake, will you? Make my boyfriend happy. Make me happy. Have some fucking fun, if it fucking kills you. Fill your fan boy bucket with all things LOTR and then come home. I promise you won’t have to see another damn horse for the rest of your stay.”

“Says the man who promised me he hadn’t set me up and then handed my name to that hypnotist two years ago, in full violation of our specified no-humiliation bro code. I still can’t look at a donut without popping a boner. Completely ruined one of my all-time favourite foods.”

Tanner chuckled. “To be fair I didn’t know that Stephen had given the guy a heads-up about your birthday, when he suggested it. But you gotta admit it was fucking hilarious.”

“It was fucking mortifying.”

The van backed out putting the driver’s window right alongside Stef. Cass rolled the window down wearing his aviators and a shit-eating grin. He proffered his hand through the window. “I’m Cass, by the way. Get in.”

“Stefan or Stef, take your pick.” Stef’s hand was briefly enveloped in the other man’s warm, dry… huge clasp and he couldn’t help but stare down. “Big hands big…”

Stef grinned at him. At least the man had a sense of humour.

“So—” Cass studied him with a gentler eye. “—are you gonna trust me and get in, or am I gonna have to break it to Arwen that you stood her up?”

“Are you kidding me?”

Stef cranked his own brows even lower, into his patented this-guy’s-a-fucking-lunatic territory. “You know I should pull out on the basis of that horrifying tourist-trap decision alone, and yet somehow I’m oddly charmed and terrified in equal measure.”

He relayed the information down the phone. “I’m riding a horse called, Arwen, Tanner. Did you fucking hear that? That must qualify as cruelty under the SPCA rules, right?”

Cass bit back a smile. “Is there a problem with the name?”

Stef locked onto those sea green eyes and couldn’t hold back a grin. God, the man was gorgeous. “Nope. But she’ll be the first and only woman I’ll ever ride—” He cocked his head cheekily. “— just saying.”

I am a New Zealand author writing in m/m romance, and romantic suspense. I have traveled extensively and lived in the US, Canada, France, Australia and South Korea. In a past life I have been an Intensive Care Nurse, Counselor, and a Nursing Lecturer.

I'm a cat aficionado especially of Maine Coons, and an avid dog lover (but don’t tell the cat). I love to cook, pretty damn good, love to sing, pretty damn average, and as for loving full-time writing, absolutely… depending of course on the day, the word count, the deadline, how obliging my characters are, the ambient temperature in the Western Sahara, whether Jupiter is rising, the size of the ozone hole over New Zealand and how much coffee I've had.

Welcome to my world.