In my attempt to cover some of the attending authors for this year's GRL,I am reviewing
Riley Hart & Christina Lee's
Of Sunlight and Stardust! 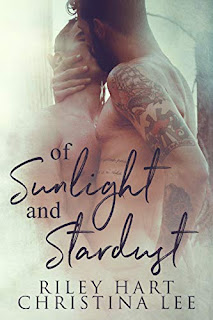 After the death of his wife, Tanner Rowe takes a step toward making her dream come true and buys the house with the dilapidated barn she’d been inexplicably drawn to in the picturesque Upper Peninsula. But after a year, he still can’t get past his grief long enough to make the repairs he’d promised.
Recently out of prison, Cole Lachlan has little to his name. Homeless, broke, and without many options as a felon, Cole heads to Red Bluff with hopes of a second chance. There he meets Tanner, whose loneliness mirrors his own, and soon Cole is trading room and board for rebuilding the burned-out barn on Tanner’s property that hasn’t been touched in seventy years.
Turns out, the barn holds more secrets than either of them could have imagined. After unearthing a hidden journal from 1948, Cole and Tanner spend their evenings poring over the pages, reading about a young man pining after his best friend. The deeper they delve into this forbidden affair from the past, the more Cole and Tanner’s own relationship shifts—from acquaintances to friends…to undeniable attraction.
But as they begin to deal with the newness of falling in love in the wake of Tanner’s loss and Cole’s past, they also become more determined to unravel the mystery of the young lovers who’ve captured their hearts, the rumors about the fire, and what really happened that fateful night.

Of course I was excited to find out that Riley Hart and Christina Lee have teamed up again. And their latest, Of Sunlight and Stardust, is as unique and special as their usual work.

What you will find is the story of two different romances, one of Tanner and Cole, and the other of Charlie and Tommy. And you will be taken on an emotional journey throughout.

Tanner's trying to recover from losing his wife, by working to restore a house she insisted he purchase. She has told him to be sure not to cut himself off from people, but this is exactly what he's done. Until Cole comes around. Cole's an ex-convict, just released and trying to find a job. He's hard pressed to find anything until Tanner takes a chance on him.

These two men are both lost, confused and pretty much hopeless. Until they find each other, and start opening up to one another. But what truly bonds them and forever changes their lives is the journal that Tanner finds hidden in the barn.

The journal is written by Charlie, and relays his feelings about his friends, Tommy and Paige, his attraction to Tommy, and the problems that face the two young men during their time, the 1940s. It also heightens Tanner and Cole's desire to solve the mystery of what happened to these two young men. Their story haunts me.

As Tanner and Cole read through Charlie's journal, they are emotionally shook by what they are reading. As they discuss their feelings, Tanner and Cole bond and form a strong connection very naturally and very quickly. It is wonderful to see them opening up to each other after being so lost and alone. In the end, it is beautiful that Cole is helping Tanner to live again.

Of Sunlight and Stardust is everything you never knew that you needed to read. The tone is soothing and gentle, despite all the emotions that take place. It's a story of hope, fear, and love. One that Riley Hart and Christina Lee tell perfectly. Add it to your must read list when you're looking for an emotionally charged book. It is definitely a book that will stay with you long after you read it.


Riley Hart is the girl who wears her heart on her sleeve. She's a hopeless romantic. A lover of sexy stories, passionate men, and writing about all the trouble they can get into together. If she's not writing, you'll probably find her reading. Riley lives in California with her awesome family, who she is thankful for every day.
http://www.rileyhartwrites.blogspot.com


Mother, wife, reader, dreamer. Christina lives in the Midwest with her husband and son--her two favorite guys. She's addicted to lip balm, coffee, and kissing. Because everything is better with kissing. She writes MM Contemporary as well as Adult and New Adult Romance. She believes in happily-ever-afters for all, so reading and writing romance for everybody under the rainbow helps quench her soul. You can find more info on her website: www.christinalee.net. From there you can link to her Facebook reader group called The Swoon Room as well as her IG account and newsletter.