Love on Show by ED Parr 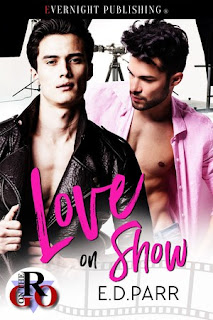 Romance on the Go ®


Justin Harper plays a gay bad boy on a TV show that’s fast becoming a cult classic, but Justin hides the fact he’s gay in real life. When a new actor is cast to play his TV show love interest, Justin can’t deny the raging attraction he feels for gorgeous Caer Rossi.
Caer Rossi makes it clear he thinks Justin is smoking hot. He can’t wait for the kissing scenes, and they sizzle, but underneath the performance for the TV show, a deep, loving passion builds between the two men. Something has to give, but what and who will it be when a journalist threatens to ruin Justin’s perfectly crafted public persona?


Love On Show is a fun, short, show biz romance by ED Parr.


The story is entertaining, with the typical Hollywood closeted actor who can't

come out of the closet because of his career. In this one, Justin and Caer have amazing

chemistry, and are really good together. But Justin just can't come out yet. As a result, he

will lose Caer, so he has some decisions to make.

This book contains a strong connection, the perfect amount of angst, and a wonderful

journey of finding that love is worthy any cost. It is fast paced and is worth the quick read.


Justin Harper glanced in the rear view mirror at the guy who’d play his love interest, Stephen. There were loads of actors in his age group who suddenly burst onto the scene via a TV show, and Justin hadn’t seen this guy before. I wonder how good he is. I should have read his IMBD. He’s hot, smokin’ hot. He has no idea who I am. He ogled me. Yeah, he likes what he sees, and to be honest, so do I. It will be no hardship kissing him. The thought brought a smile to his face. Caer Rossi—never heard of him. He indicated and maneuvered the BMW into the stream of traffic heading toward the rural side of town.


The studios occupied a few acres of prime countryside. Justin had a cottage on the outer perimeter. Most of the actors slept in trailers, comfortable, but with impersonal atmospheres. Justin had done that for a few years and knew it could be unsettling never feeling quite at home. As the hero and long-term character in the series, Justin received special treatment. Petra told him he was spoiled.


Recently he wondered if he’d become complacent. When he’d started in the show three years before, he’d told himself it was a stepping-stone. He wondered now if it wasn’t fear keeping him in the show. Could he hack the round of auditions and rejections again? He didn’t know. He pushed the question to the back of his mind.


He roared the BMW down the highway ignoring the speed limit and sped into the studio lot where Caer Rossi was to meet with Petra the AD, Sam one of the writers, and—himself. Justin grinned at this.


He screeched the car to a halt and hopped out. He took a step to stride into the building then remembered he was pretending to be a runner and had driver duties. He spun around and opened the door for the actor he’d brought from the hotel.


“We’re here. I’ll take you to the meeting. It’s stopped raining. That’s a good sign, huh?” He leaned into the car to address Caer.


The man’s brown eyes met his and in them Justin read trepidation.


He experienced a wave of empathy. “Hey, it’ll be okay.” He reached in and grasped the handle of the duffle bag on the seat beside Caer.


Caer attempted to snatch it back, but failed, then got out of the car and smoothed down his suit jacket.