In my attempt to cover some of the attending authors for this year's GRL,I am reviewing
TS McKinney's Saving Noah! 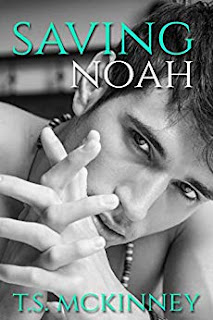 Noah tries to do the right thing—protect the innocent and make the evil pay for their sins. But instead of saving the world, he loses himself. After testifying against one of the biggest crime bosses in the country, Noah’s fear of retribution leads to a serious case of agoraphobia. There isn’t much in Noah’s safe zone that calms his nerves… well, except for his short interactions with his surly but hot new neighbor.
Life crushed Dr. Zachary Meadows’s rose-colored glasses years ago. He makes amends for the deeds of others—and for his failure to protect those in need—by saving as many lives as he can as an ER physician. After early betrayals, he purposefully keeps his circle small. Until he meets his odd new neighbor and unwanted desires cause him to act like a jerk.
When two survivors collide—one desperate for love and one afraid of it—sparks fly. But just as Zachary and Noah begin to heal one another, the past returns…with a vengeance.
One. Two. I’ve decided to come for you.
Three. Four. It won’t help Scaredy Cat to lock his door.
Five. Six. You committed a sin you can’t fix.
Seven. Eight. I’ve picked the date.
Nine. Ten. No one will ever see you again.

Saving Noah, by TS McKinney is a powerful book that grips you immediately.

Zach and Noah are neighbors, who are both broken, lonely, and have cut themselves off from the world. Zach is a doctor who spends all of his time trying to save lives, trying to atone for his sins. But it's killing him slowly, as he has no one to save him. And Noah, oh my sweet Noah, is hiding, terrified of everyone and everything, and is taken care of by people who don't care about him.

Their lives forever change when Zach steps in to take care of the agoraphobic Noah. Noah trusts Zach, after not trusting anyone for years, revealing his issues to Zach. It ends up that Noah is hiding from danger, as he has a dangerous person from his past who would like nothing more than to kill him.

Their love story is beautiful, as TS McKinney takes these two broken men, and heal them with the help of one another. Zach never wanted to open his heart to love again, and Noah knows his situation won't allow him to fall in love.

It is phenomenal the way that Zach can't resist loving the troubled Noah, and that this love saves him. Zach hadn't realized how much he was both physically and emotionally broken. But falling in love with Noah helps him to live again as opposed to just going through the motions.

TS McKinney has completely impressed me with Saving Noah, as it's compelling, thought-provoking and remarkable.

I have spent my entire life reading, reading, and reading some more! I love to get lost in the land of fantasy where I can be as naughty as I like without facing too many penalties! Earlier this year, I decided that maybe I should try writing my own naughty stories. That way I can do wickedly delightful things to my imaginary boyfriends without serving any serious jail time! My publishing company, Dark Hollows Press, has been awesome and most patient when dealing with their newbie.