In my attempt to cover some of the attending authors for this year's GRL,I am reviewing
Sara York's Texas Soul Series! 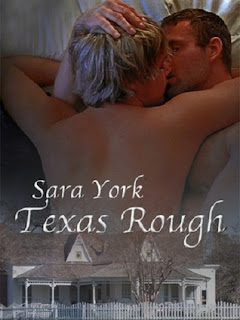 Lane Daniels loves his job, working as a foreman on the south Texas ranch gives him the type of satisfaction he’s always craved, but the owner of Crazy Hills ranch, Gresh Hamilton Miller the third, has woven his way under Lane’s skin, leaving Lane crazy for the man’s touch. But doing the boss is out of the question.
Gresh wants more from Lane than his ability to handle livestock, he wants it all. Lane won’t give him the time of day so he forces the issue, setting up a date that Lane believes to be a business meeting. Alone together, Lane and Gresh ignite in a flash of passion.
Just when it feels like there could be something more between Lane and Gresh, the new doctor in town, Riley, sets his sights on Lane. Riley chases hard after him, insinuating himself in Lane’s life, highlighting Gresh’s faults. But Gresh won’t give up without a fight. Will Lane and Gresh be able to survive the intrusion, or will Riley be the one walking away with Lane's heart?
Texas Rough is the first book in Sara York’s Texas series. Texas Hard and Texas Twist are next in line. Get ready to get your cowboy on and go for a rough ride

The entire Texas Soul series, by Sara York, is amazing!!! It will always remain one of my favorite series.

The series starts with Book One - Texas Rough, where we get to watch Lane and Gresh fall in love. And, I have no words to explain how much I love these two men!

Gresh is the rich and powerful ranch owner, who never expected to fall in love with his foreman, Lane. But fall he does. And hard. He has to fight off the town's new doctor though, as Riley also has his eyes on Lane.

This book is perfect! It completely sucked me in and I had to read the whole series within a couple of days. I could not get enough of these men. And, luckily, the series continues to take place on the ranch, so we continue to see Gresh and Lane in each book. As well, each book adds new characters to the ranch, and we get to know them all well.

Rich ranch owner, ranch foreman, doctor, ranch hands, and more. This series has it all. Sex in the open, cowboys coming out, danger and more. Sara York manages to deliver some extremely memorable and steamy scenes in each book.

Basically, if you haven't read this Sara York series, do so now!

Writing is Sara’s life. The stories fight to get out, often leaving her working on four or five books at once. She can’t help but write. Along with her writing addiction she has a coffee addiction. Some nights, the only reason she stops writing and goes to sleep is for the fresh brewed coffee in the morning.
http://sarayork.com