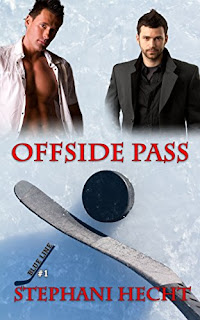 
At one time Devon Canton and his two brothers were the talk of the NHL. Set to become the next superstars of the sport, they had lucrative contracts and numerous endorsements within their reach. Then the bottom fell out of their world and everything changed. Now struggling to make ends meet, they have been reduced to playing in the minor leagues. To make matters worse, they all end up playing for the same dead-end team, the Battle Creek Hawks. Not only hasn’t that team won a game in three years, but their arena is falling down around them and is in danger of being condemned. Then Devon and his brothers hit a new low when they get thrown out of their first game for getting into a brawl…with each other.Battle Creek Times sports reporter Saul Davis knows the instant he see the three brothers beating the snot out of each other that he has a story. It only takes a little digging to find out how far the once promising hockey players have fallen. Intrigued, Saul tries to pin down Devon for an interview, only to be rudely rebuked. Unfortunately for Devon, that only makes Saul more determined to get to the bottom of the story.Then Saul uncovers something about the brooding hockey player that could not only destroy the man’s reputation, but also ruin any chance of him every playing on the professional level again. Saul knows he should go ahead and run the story, but as he finds himself growing closer to Devon, he realizes that his feelings for the other man are too strong to ignore. When a rival reporter also discovers Devon’s secret, Saul recognizes that he may have to make the most painful decision of all – his own journalism career or Devon.

I've been a fan of Stephani Hecht for a while now, and I am finally getting around to reviewing Offside Pass, the first book in her Blue Line Hockey series.

I really enjoy this book. At it's heart, it is so much more than just a romance. Devon and his brothers are famous hockey players, who seem to hold a secret. When the brothers arrive at their new team, reporter Saul wants to be the one to figure out what they are hiding.

Yes, Saul does solve the mystery, but by then he's falling for Devon and isn't sure if he can spill their secrets after all.  As sweet as all of this is, I really came to love the brothers and their undying love and support for each other, as well as their mother. If only every family could be so close.

As for Devon and Saul, they are good together, and make for a fun, light-hearted romance. The book is quick, with a good pace, and will satisfy a little bit of your love of hockey romances. Offside Pass is definitely one such hockey romance that I enjoy!


Stephani Hecht is a happily married mother of two. Born and raised in Michigan, she loves all things about the state, from the frigid winters to the Detroit Red Wings hockey team. Go Wings! You can usually find her snuggled up to her laptop, creating her next book or gorging on caffeine at her favorite coffee shop.When she’s not running around like crazy, trying to get her kids to their various activities, she’s currently working on numerous projects. In the coming months, she has several books coming out with eXtasy Books in both The Lost Shifter Series and Drone Vampire Chronicles, plus a few additional projects that are still in the development stages.
Visit Stephani on the web at: