All These Hidden Scars (Loose Ends 0.5) by Avril Ashton 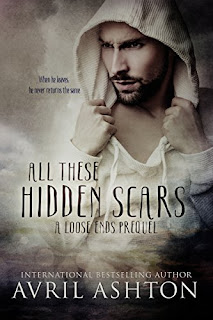 When I leave, I never return the same.Pretending came far too easily for Sullivan Black. One of the reasons he rejected his privileged family and joined the FBI. But those dangerous assignments take something from him every time, leaving him a mess, unfamiliar even to himself. As he struggles to shed the skin of his latest op, he finds solace in the most random of places.Bar manager, Carter Renault’s only intention was to escort the lonely stranger out of his place before he locked up. Yet somehow they end up in an alley, Carter’s pants around his ankles. Their encounter is intense. A onetime thing. Except months later Sullivan is sneaking through Carter’s window, appearing and disappearing at random. The blistering-hot sex doesn’t hide the obvious torment Sullivan is going through, but Carter doesn’t want to be caught in the middle.

Just when he thinks he’s seen the end of that undercover life, Sullivan gets pulled back in. But this time, his identity is no longer a secret, and the aggressive need he has for Carter could get the other man killed. To set everything right, Sullivan has to face the one man he loves and hates in equal measure…his twin.


All The Hidden Scars, the prequel to Avril Ashton's Loose Ends series is absolutely amazing.

We meet Sullivan as his twin is going off to jail, leaving Sullivan lost and unsure of how to go on without his other half. Sullivan is an undercover FBI agent who's sent into awful situations, and gets way too involved in order to not blow his cover. Unfortunately for him, each time he returns home from a case, he doesn't return the same, as he is naturally affected by the awful and criminal things he sees and does.

When Carter, a bar manager meets Sullivan, he is taken by surprise, as Sullivan wants Carter and is hot and aggressive with him. Qne quickie is not enough for Sullivan, leaving him crazy in his pursuit of the sweet Carter. And pursue he will.

Their story is gritty, desperate, terrifying and addicting. Two men, who struggle to survive each day. One man who can't stop himself from running away, despite how difficult it is to do. He has a hole in his heart where his brother used to be. The other who needs his lover to comfort him. There's a blind want, a desperation.

This story is riveting, and not for the faint of heart. These are two men who are full of memories, regrets, pain, desperation, and despair. They have to deal with betrayal and torture, as well as their love for one another.

All These Hidden Scars is as complex and multi-layered as I've come to expect from Avril Ashton. I am quickly becoming addicted to the dark worlds that she creates.