45 and Holding -by Jacki James and Jill Wexler 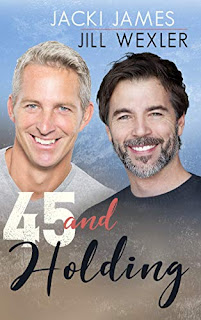 When widower Scott Anderson’s daughter goes off to college, he finds himself alone for the first time in as long as he can remember. With his primary role no longer being “Claire’s dad,” he realizes he isn’t sure who he is or what he wants out of life.
For Craig Baker, a mid-life crisis crept up on him in the form of restlessness that a new Jeep didn’t solve. Just as he’s contemplating getting a tattoo to try and shake himself out of this funk, he meets an old classmate who is in the same boat.
They’re both trying to figure out who they are at the age of forty-five.
For one man, there’s a slow realization that maybe he doesn’t need something to cure the restlessness, but someone.
For the other man, it’s the discovery of a new side to himself and the willingness to embrace it.
And for both of them, it’s realizing that mid-life means you still have half your life left so you might as well live it.


45 and Holding is a fantastic romance by Jacki James and Jill Wexler. It's a
perfectly refreshing and realistic romance between two middle aged men. And for this middle aged woman, it is a must read!

Scott and Craig meet up 26 years after they graduated high school together. Both are going through some changes, as Scott's dealing with the fact that his daughter just moved out, and Craig's going through a mid-life crisis.

They friendship picks up quickly and what starts as companionship turns to love. Their relationship is absolutely sensational and entertaining. I love everything about the men and them as a couple only makes things better. And, omg, the humor. I was definitely laughing out loud during the rat scene. So damn funny!

Please do yourself a favor and read 45 and Holding now! Jacki James and Jill Wexler will leave you happy and satisfied with this gem!