In my attempt to cover some of the attending authors for this year's GRL,I am reviewing
The Pick Up by Allison Temple! 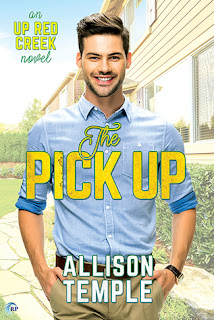 Kyle’s life is going backwards. He wanted to build a bigger life for himself than Red Creek could give him, but a family crisis has forced him to return to his hometown with his six-year-old daughter. Now he’s standing in the rain at his old elementary school, and his daughter’s teacher, Mr. Hathaway, is lecturing him about punctuality.
Adam Hathaway is not looking for love. He’s learned the hard way to keep his personal and professional life separate. But Kyle is struggling and needs a friend, and Adam wants to be that friend. He just needs to ignore his growing attraction to Kyle’s goofy charm, because acting on it would mean breaking all the rules that protect his heart.
Putting down roots in this town again is not Kyle’s plan. As soon as he can, he’s taking his daughter and her princess costumes and moving on. The more time he spends with Adam, though, the more he thinks the quiet teacher might give him a reason to stay. Now he just has to convince Adam to take a chance on a bigger future than either of them could have planned.
Word count: 87,600; page count: 337

The Pick Up, Allison Temple's debut novel, is a great and refreshing feel-good romance.

Both Kyle and Adam have some issues in their past, but are now in Red Creek starting over. Kyle's back in the town where he grew up, with his daughter, after losing his wife. Adam, meanwhile, has been a teacher at the school in town for a couple of years, after leaving his former job and life.

Now that Adam is teaching Kyle's daughter, they meet, and the attraction is there. As they try to date, moving forward towards a relationship, things get complicated as Adam doesn't want to be involved with a student's father.

Adam and Kyle are both interesting characters, kind and pleasant, yet tentative. As a couple, they will face their share of obstacles, resulting in some light angst.

This is just one of the stories that has you feeling happy and charmed as you read. The writing is tender and soothing, as Allison helps us get to know these characters well. And the small town, Red Creek, is well written, with all the small town charm you expect in a book like this.

I love Kyle and Adam's story and Allison Temple told it perfectly. I am thrilled to have discovered The Pick Up and am excited to see what Allison comes up with next.


Whether I knew it then or not, I've been a writer since the second grade, when I wrote a short story about a girl and her horse. My grandmother typed it out for me and said she'd never seen so many quotation marks from a seven-year-old before. I took that as a challenge and have tried to break that record in all the stories I've taken on since then. It's good to have goals, right?I live in Toronto with my very patient husband and the world's neediest cat. They both listen attentively when I talk about my characters like they're real people. I try to split my free time between writing, community theater stage management, and traveling anywhere that has good wine. Tragically, this leaves no time to clean the house.