In my attempt to cover some of the attending authors for this year's GRL,I am reviewing
Put A Ring On It by KA Mitchell! 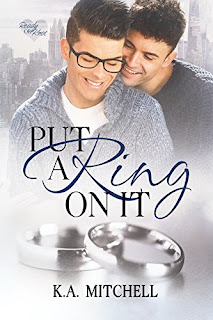 Ready or Knot: Book One Kieran Delaney-Schwartz—adoptee, underachiever, and self-professed-slacker IT guy—lives his under-the-radar life by the motto: Don’t try, don’t fail. His adopted siblings are all overachievers thanks to his driven, liberal parents, but Kieran has elected to avoid disappointing anyone by not getting their hopes up. He’s coasting through his early twenties when he’s hit head-on by Theo. The successful decade-older Broadway producer sweeps him off his feet for a whirlwind thirteen months that are pretty sweet, until it all comes screeching to a halt on Valentine’s Day, with an unexpected proposal via an NYC Times Square flash mob. Now everyone wants in on the wedding, except the grooms….

Put A Ring On It is the first book in this super sweet series, Ready Or Knot by KA Mitchell.

Kieran and Theo, boyfriends for over a year, have been living together for a few months. Things are going great until Theo decides to propose in a very public and embarrassing manner. So what's the problem? Well, for one, Kieran is introverted and socially awkward, so this is not his ideal proposal. The other problem? Oh yeah, they've never even discussed marriage.

Put on the spot, Kiernan say yes, but his heart isn't in it. After that, things get crazy when a morning talk show airs their story and wants to pay for their wedding. The catch? It needs to take place in 2 weeks and they'll air it. In other words, exactly the opposite of what Kieran wants.

Now they are dealing with some well- meaning, but not some helpful friends and family, in addition to a producer who doesn't have their best intentions in mind.

This book is gripping, even as it has you wanting to yell at the couple to just talk to each other, honestly, and really discuss their feelings. It contains some tender and sweet moments, some fun humor, and lots of frustrating moments. As I love this type of story, this one left me charmed.

I appreciated the vastly different personalities of the Kieran or Theo, as they are well written and it's a joy to read how they ultimately compliment each other.

If you haven't read Put A Ring On It, and the other Ready Or Not books by KA Mitchell, you are missing out. It is great, as it's written with thought and tenderness.