All He Ever Needed by Cate Ashwood 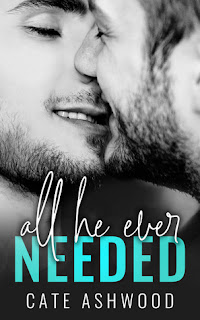 Some secrets are too heavy to hold on to forever. For Ethan, pretending has become second nature. After all, he’s spent the last decade pretending to be straight, pretending to be happy, and pretending he isn’t desperately in love with his best friend. But in a single moment of raw honesty, all those lies come crashing down around him and he’s left wondering what to do next.When Jase learns his best friend is going through a breakup, his first instinct is to come to Ethan’s rescue, and he knows just the thing to help. The cabin where they spent summers as kids is sitting vacant, and a week there is the perfect remedy to start healing a broken heart.

In the seclusion of the mountains, long-buried fears and emotions take their friendship into unexplored territory that will either bring them closer together… or tear everything apart.


All He Ever Needed, by Cate Ashwood is a great fun, feel-good romance!

Ethan and Jase grew up together, but it isn't until Ethan breaks up with his long time girlfriend that they realize how much they really mean to one another. When Jase learns of the breakup, he whisks Ethan away to let him get a breather as he tries to recover.

During this trip away, Jase suddenly sees Ethan in a new light. At first, Jay's caught off guard by Ethan's confession that he is gay, as he feels betrayed, thinking he knew everything about his friend. But, as he gets used to this idea, he starts to realize that he has feelings for Ethan, despite the fact that he's never looked at a guy sexually before.

Ethan meanwhile, is struggling, trying to figure out what he wants his future to look like. As the two men come together, they both have a whole lot of fears to face, and questions to consider. As readers, we get to follow along as they try to figure out if and how they can mesh their lives together. The issue of evaluating if their new relationship transfers to the real world, is well developed, and realistically explored.

All He Ever Needed is well written, moves quickly and has a great flow.
Cate Ashwood not only gifts us with this good story, but excels at forcing the men to find their way in this new reality, both individually and as a couple.