Joshua Hannes, the concierge of the
Vivaldi Central Park Hotel prides himself on fulfilling every impossible
request. Tickets to a sold-out show? A purple dye job for a purse dog? A
last-minute table at a premier hotspot? No problem.

But the devastatingly handsome penthouse
guest wants what?

Self-made billionaire Craig Ridley’s in
New York on business, but at the end of the day, he wants to relax with someone
interesting. The concierge should be able to supply a friendly face. Just for a
little conversation. Dinner and a card game. Not sex with a man he doesn’t know
or respect.

Craig didn’t expect the concierge to
personally volunteer. Nor to be the man Craig hadn’t known he needed.

A smoldering standalone romance with an
HEA.

Craig's in NYC for a short bit for business. While, he's there, he strikes up a friendship with the hotel's concierge, Joshua. Unfortunately for Joshua, he's riding that fine line with his employers, as he isn't supposed to fraternize with hotel guests. And, unfortunately for both men, there's an attraction between them that they shouldn't act upon.

Craig and Joshua are living very different lives, as Craig is rich and lives in another town. Joshua may have high connections in the city, but he isn't rich and his job can only work in the city where he has said connections.

During their time together, they have to deal with a jealous co-worker, an aggressive business partner, health scares, and the fact that they aren't supposed to be spending time together.

Their romance is fast, but builds up slowly. I am somewhat surprised that I enjoyed these guys as much as I did, but I really did like them. The bond that forms between them is strong and leads to a wonderful, emotional, and life-altering scene.

Concierge Service is great if you're in the mood for a light-hearted (despite the angst) read. PD Singer definitely didn't leave me disappointed with this one.


Fed, but caught in the weird limbo of
exhausted and wired, Craig paced around his lush temporary domain. Another
exploration of the secondary bedroom brought out a detail he’d missed before.

He picked up the towel elephant, trying
to figure out how it was put together without unrolling it. Nice. Craig had
only asked for one, out of the sheer whimsy of being able to make such a
nonsensical request and having it fulfilled. The guy who’d rolled and tucked
this little critter into existence had not only left one on the master bed, but
had gone the extra mile to leave one in here, too. Thorough.

Craig admired that in a man.

The man himself was easy on the eye,
tall and lean, with a shock of brunet hair that would look wonderful tousled,
even better than neatly combed.

Which was a thought for the spank bank,
and not going to do him a lick of good now.

The spank bank hardly ever had deposits.

Did jet lag do bad things to the brain?
Here he was, indulging in a fantasy of a stranger about whom he knew nothing
more than the man was thorough. Maybe he couldn’t make conversation past the
latest celebrity gossip. Or he could have a partner. Maybe the long drought
since the last truly interesting man had crossed Craig’s path was making his
imagination work overtime.

Whatever, it wasn’t like he’d have the
opportunity to find out, which at least attached to the privilege of skipping
the argument over attraction. He’d been called “unbefuckinglievably picky” a
few too many times by men he’d found unbefuckinglievably ready to drop trou
without knowing one damn thing about him, let alone liking or respecting
anything beyond his face and his bank account. Skip that whole mess and the
concierge could remain a pleasant thought.

He flicked through four movies, hating
each one within a scene or two. He could go out, but that involved shoes. He
could play the Steinway, but three rousing renditions of Chopsticks exhausted
his repertory.

Anyone he wanted to talk to was two time
zones away, probably putting the kids to bed or catching up on the cuddles
they’d missed while they were scrambling to get this IPO put together.

Craig hadn’t missed any cuddles, or he’d
missed all the cuddles from a someone who wasn’t part of his life. He needed to
meet somebody, like that was possible.

This particular bit of craziness would
be over in a week, but the nuttiness that came from running the company and
doing the social things that went with running the company weren’t going away.
Try finding someone who understood that. A fuck buddy didn’t get to question
it, but Craig doubted he could even get it up for any man he had so little
regard for. He could scratch his own damn itches, but if he started talking to
himself…

Maybe that was the answer—unwind with
one of the toys he’d dragged along from Denver this morning. He unpacked his
suitcase, eyeing the bottle of lube. Did hotel guests ever ask the concierge to
fetch another bottle, or more toys? Not a request Craig could see himself
making.

No, he didn’t want to give himself a
solitary hand job—he wanted to talk to someone. See a friendly face. Someone
who wouldn’t accidentally turn the conversation back to equity and shares and
total float and lockout time, and how much more would they be worth when…
Someone not associated with work. Or his usual life.

He eyed the sleek black house phone on
the bedside table.

Naw. Too ridiculous. Too late.

Twenty-four/seven concierge service,
whispered the memory of the redheaded twink at Reception. And the concierge on
the phone: If you want it, I can get it for you.

Oh, hell. The worst they could say was
no. 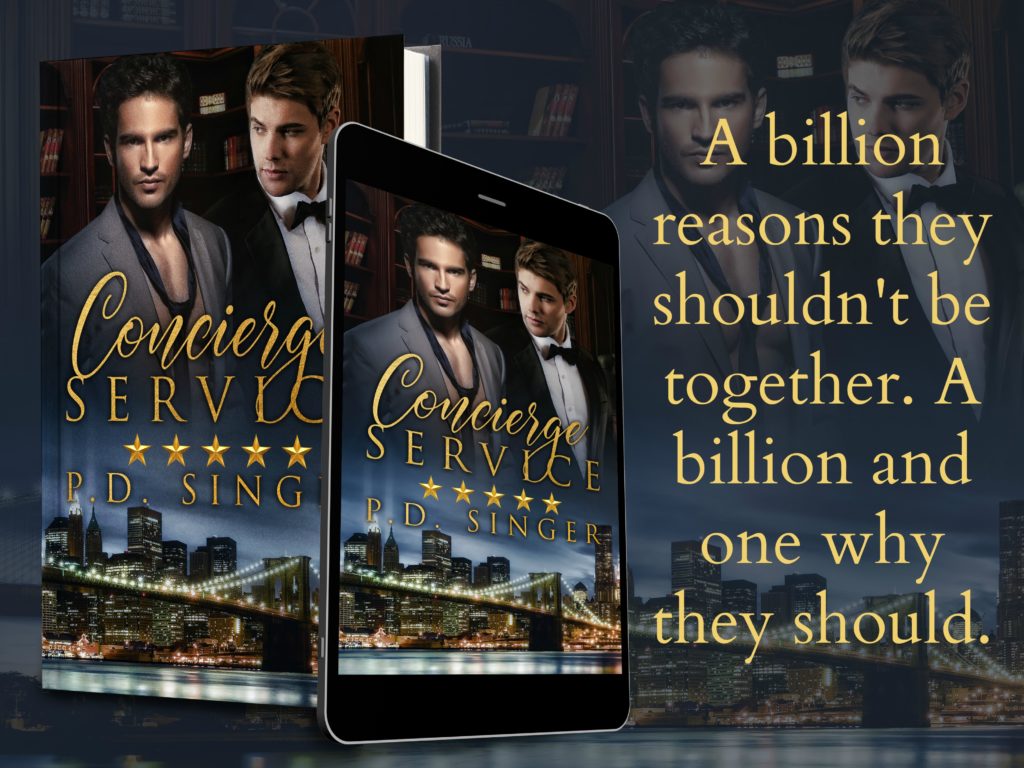 P.D. Singer lives in Colorado with her slightly bemused husband, one tall young man, half a case of empty nest syndrome, and thirteen pounds of cats. She’s a big believer in research, first-hand if possible, so the reader can be quite certain Pam has skied down a mountain face-first, been stepped on by rodeo horses, acquired a potato burn or two, and will never, ever, write a novel that includes sky-diving.