In my attempt to cover some of the attending authors for this year's GRL,I am reviewing
JR Gray's King Consort! 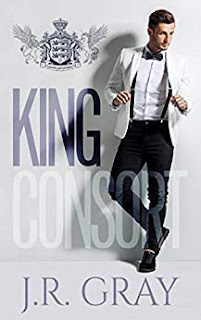 
Avoiding sleeping with women was my specialty, an art form even. As the future King of England I couldn’t be caught sleeping with men. My whole life played out in front of the paparazzi, and they didn’t miss a thing. I had a carefully crafted womanizing persona to maintain. My life came with rules, all of which I broke when I couldn’t resist a one night stand with the enemy: A beautiful paparazzo with a heart of gold. He may be the only person who doesn’t want me for my title, and he can never be anything more than my secret.
But secrets have a way of coming out and not only will they scare him away, but they’ll lose me the crown.


King Consort by JR Gray is a compelling story of impossible love. It's amazing, with a sweet and intriguing couple. And a great trope, expertly executed!

Xavier is a member of the paparazzi whose been assigned to follow Louis, the heir to the British throne. Louis is firmly locked in the closet. His grandmother is pushing him to find a wife, and he can't figure out a way to be honest with her about his sexuality. Thus, he's looking at a life filled with a wife he doesn't love, and being denied what he wants.

A royal falling in love with a member of the paparazzi is a great storyline. But, even better is the way it's told. JR Gray adds in some wonderful and thought-provoking aspects of being both a royal, as well as being a member of the paps.

Xavier and Louis meet by accident, and the attraction is strong. They end up connecting not only sexually, but also mentally. Their strong desire to help and protect each other is fascinating. And eventually they find themselves falling in love. But, they have an end date, as Louis will be returning to his home, and he could never be an out and proud king. They decide to use their time wisely and spend as much time together as they can, while they can.

Their relationship is heart-felt and romantic, full of complications and discovery. They definitely work for everything they get, ending with a hard fought HEA.

King Consort is my first time reading a JR Gray book, and I am elated to have discovered this one. It's fun, warm hearted and well worth a re-read in the future!

When not staying up all night writing, J.R. Gray can be found at the gym where it's half assumed he is a permanent resident to fulfill his self-inflicted masochism. A dominant and a pilot, Gray finds it hard to be in the passenger seat of any car. He frequently interrupts real life, including normal sleep patterns and conversations, to jot down notes or plot bunnies. Commas are the bane of his existence even though it's been fully acknowledged they are necessary, they continue to baffle and bewilder. If Gray wasn't writing…well, that's not possible. The buildup of untold stories would haunt Gray into an early grave, insanity or both. The idea of haunting has always appealed to him. J.R. Gray is genderqueer and prefers he/him pronouns.