In my attempt to cover some of the attending authors for this year's GRL,I am reviewing
TJ Klune's John & Jackie! 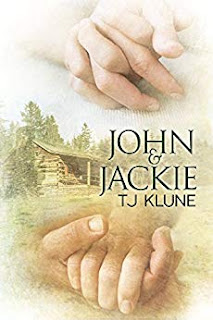 2nd Edition
John and Jackie first laid eyes on each other when they were twelve years old. Now, seventy-one years later, Jack prepares to give his beloved husband the ultimate gift. Before he does, they'll relive five key moments from their younger lives together over the course of a single afternoon. From their first meeting and first kiss to the violence of an abusive father and the heartache of growing up, these moments have defined who they have become. As sunset approaches, John will show the depths of his love for the one man who has made him whole: his Jackie. They'll soon learn there is no force more powerful than their devotion to one another.

1st Edition published by TJ Klune with The Crack Crew, May 2013

TJ Klune's John & Jackie is one of the most memorable books I have ever had the pleasure of reading.

This story follows the lives of John and Jackie, from the time they meet, through their 71 years together, and through their deaths. It is remarkable, accomplished, and covers a love story that we all want.

During John's last few hours on earth, the couple talk about things they need to say before it's too late. Through these flashbacks, we learn about the early years of their lives and how their strong bond was formed.

This story is happy, sad, and everything in between. It is truly one of the most beautiful stories ever. Their love story is inspiring and exquisite. TJ's writing style is superb, as usual, as he has created this well crafted, emotional journey that clearly demonstrates a pure and absolute love.

If for some reason you haven't yet read this amazing story, please do yourself a favor, and do so now! Just don't forget the tissues, as TJ Klune will have you ugly crying.

When TJ Klune was eight, he picked up a pen and paper and began to write his first story (which turned out to be his own sweeping epic version of the video game Super Metroid--he didn't think the game ended very well and wanted to offer his own take on it. He never heard back from the video game company, much to his chagrin). Now, over two decades later, the cast of characters in his head have only gotten louder. But that's okay, because he's recently become a full-time writer, and can give them the time they deserve.Since being published, TJ has won the Lambda Literary Award for Best Gay Romance, fought off three lions that threatened to attack him and his village, and was chosen by Amazon as having written one of the best GLBT books of 2011.And one of those things isn't true.(It's the lion thing. The lion thing isn't true.)tjklunebooks.com