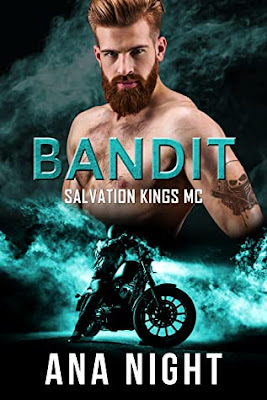 Auggie aka Bandit is the treasurer and hacker of the Salvation Kings. With half the Henchmen now on their side, there’s much to figure out, which results in one of the former Henchmen staying with the Kings. Russell is the kind of man Auggie wants but needs to stay away from. There’s something about the big bearded man that draws Auggie in and as much as Russell scares him, he also makes him feel safe. His attraction to Russell is strong but acting on it means trusting the man and sharing parts of himself he’s kept hidden for years.Russell ‘Skinner’ Jones used to know who he was. Then Ronin happened. He doesn’t regret leaving with Ares, but he knows starting over won’t be easy. They’re lucky to have the Kings’ help and there’s one King in particular that has caught Russell’s eye. One look at the small skittish man and he knows he needs to find a way to earn Auggie’s trust. Auggie’s been hurt in a way that’s left him with deep emotional scars, but that doesn’t stop Russell from wanting him. It only makes him more determined to prove himself worthy of Auggie’s love.But can Russell keep Auggie safe when the monster from Auggie’s past comes looking for him?

Ana Night's Bandit, the fourth book in the Salvation Kings series, is thrilling and romantic. It's easily read as a standalone, but contains past characters, thus making it even more enjoyable if you've read the previous books.

Auggie and Russell are two intriguing characters who make a fantastic couple. Their hesitations and complications are well handled and their relationship is emotional in it development.

Auggie's backstory is well developed and explored, creating a lovable, sympathetic character. His ability to eventually trust Russell is beautifully handled. And then there's Russell, who is so damn patient, kind, and caring with the skittish Auggie. It's impressive the way the author brings them together.

The writing is great, with a multi-layered story of action, danger and suspense.
It's fast paced with plenty of tender emotions. The abuse and family issues are treated with care. But most impressive is the way the author throws in some surprises, changing up the tone at times.

Although it's a story that ultimately revolves around a motorcycle club, it is way more than just that. It's a story of finding out what one really wants out of life and grabbing onto it.

Bandit is a riveting story of learning to trust and letting yourself love. This Ana Night tale is intense with plenty of heat and romance. This whole series is great. and I can't wait to see what happens next.