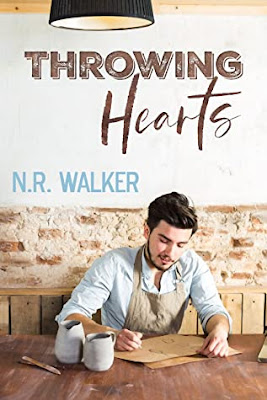 
A fun and sexy romance where the kiln isn’t the only thing that’s scorching hot.

Leo Secombe loves his life, and he’s convinced himself he’s happy to be single. In his spare time, he keeps himself busy at a local LGBTQ centre that pairs a younger person with a community elder to help them feel included in today’s rainbow family. Leo and Clyde have been buddies for a few years now, and signing up for a pottery class seems like fun.

Merrick Bowman has been so focused on getting his pottery business up and running that he’s forgotten how to date. How to live, even. But when a young, bubbly Leo and an older, grumpy Clyde walk through his door, Merrick has no idea how much Leo is about to centre his world.

Throwing clay has been Merrick’s entire life, but Leo’s about to change all that. Maybe Merrick’s ready to throw caution to the wind. And maybe he’s ready to finally throw his heart on the line.
Throwing Hearts is 55,000-words.

Throwing Hearts is a magnificent stand-alone book by NR Walker.

There is so much to love about this accomplished tale. The author delves into the importance of discussing and respecting sexual boundaries. But most of all, it's the older men in this story who are the ones who fully carry this spectacular story.

The author excels in her exploration of how far things have come for the LGBT community. She explores both the older generation's inability to be open, as well as their inability to even understand themselves. Merrick's uncle Donny will definitely break your heart. Seventy years of not only hiding himself, but also being miserable, full of shame and fear. So damn sad, and so damn realistic for his generation.

As well, the author includes fantastic looks into pottery, both the techniques as well as the feelings the craft evokes.

The whole story is perfectly heartfelt and wonderfully developed. The ending is just perfect! The reader will fall in love with Leo and Merrick, as well as Clyde and Donny. It's a truly beautiful story that will leave the reader a better person for having read it.

Throwing Hearts is classic NR Walker. The characters will bring you fully into their lives, wrap you up in their love, and leave you completely satisfied in the end. 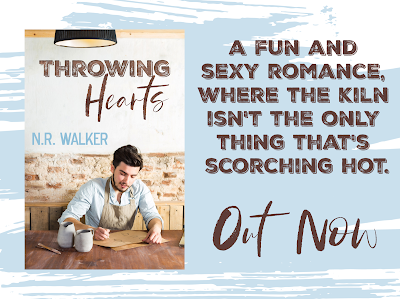 
Is this the same Leo who is half of the Leo and Clyde super duo? 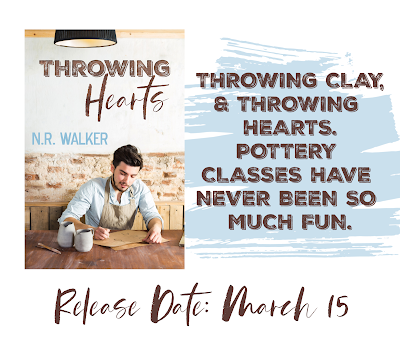 N.R. Walker is an Australian author, who loves her genre of gay romance. She loves writing and spends far too much time doing it, but wouldn’t have it any other way.
She is many things: a mother, a wife, a sister, a writer. She has pretty, pretty boys who live in her head, who don’t let her sleep at night unless she gives them life with words.
She likes it when they do dirty, dirty things… but likes it even more when they fall in love.
She used to think having people in her head talking to her was weird, until one day she happened across other writers who told her it was normal.


She’s been writing ever since…


For more about N.R. Walker you can find her at: 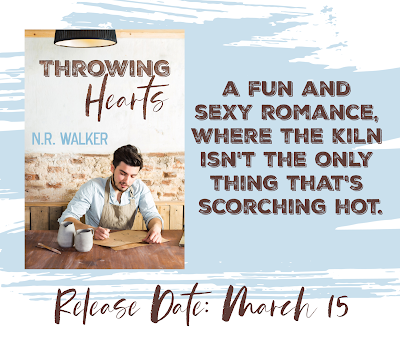