In Safe Hands (Heroes and Babies #1) by Victoria Sue 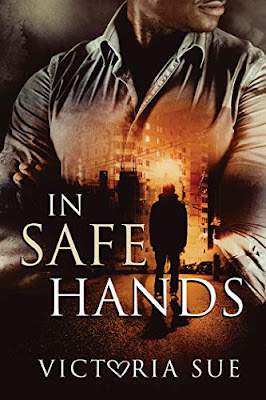 Former helicopter pilot Maverick Delgardo's injuries ended his Air Force career, leaving him bitter and one drink away from becoming an alcoholic. When his sister asks for his help on a private protection case to babysit a disgraced pop star, Mav reluctantly agrees. Deacon Daniels, onetime lead singer and idol to his teenage fans, saw his career and reputation ruined when a reporter's exposé led to a devastating scandal. Without money or a job, a heartbroken Deacon has lost custody of his baby niece. And just when Deacon thinks his life can't get any worse, a stalker's threatening messages escalate to murder. Mav only agreed to one meeting, but his protective instincts kick in, along with an attraction to Deacon. When the body count increases, however, Mav is unsure he is up to the task of protecting Deacon from a killer. But it is too late for Mav to step away, now that he's lost his heart, and he must find the strength to reassure Deacon and his niece that they are in safe hands no matter the cost.


Victoria Sue's In Safe Hands is a marvelous bodyguard romance.

Deacon and Maverick are complete opposites, both in life experiences and personality, but they both know pain. Deacon's past is heart-breaking, as he's suffered a life time of verbal and physical abuse. Maverick, who's been barely living, is a victim to his scars and amputation. Being forced to watch Deacon brings him out of isolation.

Maverick's instant desire to protect the young Deacon is wonderful. What follows is a riveting mix of romance, healing, danger, and action. It's heavy on the character growth and I love Molly!

It's a thrilling story, all told in a soothing tone. The author's writing is superb, full of complex characters and a multi-layered storyline. The suspense is great, a constant throughout this budding romance. The author takes a nice turn from  the norm by not just telling things from the main character's points of view, but also from the stalker's. This totally ups the creepy factor.

Basically, In Safe Hands is awesome and I love it all. This Victoria Sue read is riveting, compelling, and absolutely satisfying.