Forever With His Boss (Amber Falls #2) by Rheland Richmond 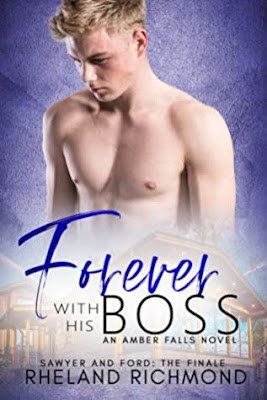 Ford had fallen for his boss—hard. All that time in close proximity, who could blame him?
But then the craziest thing happened... Sawyer fell for him too, and they had a wonderful Christmas to remember. This Amber Falls boy had never been more grateful for a snowstorm and closed airports—especially when it led to his forever.
The couple spent a few amazingly romantic weeks together—at work and at home—until Sawyer took what he promised would be a quick trip to New York… only he's not returned... and now he’s unreachable.
Maybe forever was just a moment in time and Sawyer wasn’t the man Ford thought he was.
But then he remembered the way Sawyer looked at him and Ford decided to follow his heart… literally. Only when he showed up in New York, it was to find Sawyer with a teenager, a tween and a toddler in his home.
Maybe he never knew the man he fell for, or maybe there's an explanation for everything.
Besides, there was something about Sawyer with a baby in his arms that Ford couldn’t quite resist.


This is not a Standalone, but the finale of Sawyer and Ford's story that began in Stranded With The Boss.

Forever With His Boss is a riveting romance. The second book in Rheland Richmond's Amber Falls series, it continues with that same feel good mood.

After meeting Ford and Sawyer in Stranded With the Boss, we now get into their relationship more. They are absolutely great together; a loyal and tight unit.
Their story is full of endless amounts of love. Their relationship is strong enough to get past anything that comes their way, but it will be tested over and over. And they also have to test their trust in one another, and test it they do. But their absolute love for one another can promise you a happy ending.

The have to deal with suddenly having kids to raise, family issues, and more. They have to deal with homophobia, work issues, and a druggie parent. The chemistry between the men is smoking, and their bond becomes even stronger throughout their upheaval. And once again, there's a wonderful sense of family, as Ford's parents continue to bring a lot of warmth to their story.

I enjoy the author's writing style, finding it soothing and well developed. Her characters are lovable and the story line is compelling, with the perfect amount of angst. I definitely couldn't put this story down.

Overall, Forever With His Boss is perfect when you're in the mood for an established couple dealing with obstacles thrown their way. Rheland Richmond does a wonderful job with this story and I am excited to see what happens next in Amber Falls.