Charming as Puck by Van Cole 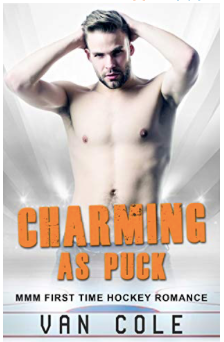 A Blistering Romance Between A Rookie Hockey Player And a Veteran Threatens To Melt The Ice.I was that rookie hockey player, at his first training camp and all the pressure was on me.As the son of the former star player, Bryan Sixsmith, everyone expected me, Axl, to return the team to the glory years, no one more so than Dad.One player who didn’t appreciate me was a veteran, Chip.Despite an initial clash in personalities, I sensed a growing tension between us and although I’m straight, I couldn’t stop fantasizing about my older teammate.Added into the mix was a blogger, Zack, who was documenting the team’s season and he found evidence of our illicit relationship.But what did he want, and what would it cost to keep our secret?Charming As Puck is a standalone MMM First Time Hockey Romance with a HEA and NO cheating!

Axl's the son of a hockey legend, always being compared to his famous father. They have a tough father/son relationship, full of expectations and burdens. All told from Axl's pov, Axl finds himself attracted to Chip, his new teammate who's a former teammate of his famous father. A gay man, Axl's never had a chance to acts upon his feelings before. As for Chip, he's gay but has always been closeted.

What follows is quick story of a man who's never acted on his sexual feelings before and another who has experience, but has always been closeted. Their story is one of some sexual exploration, and the struggle of coming out. Their story includes an age gap, and a huge conflict with Axel's father. And it's all great.

Charming as Puck is short, fast paced, and hot. For such a short tale, it never lacks character or storyline development. Simplistic and to the point, this Van Cole definitely entertains. And damn, I love the surprise steamy scene.