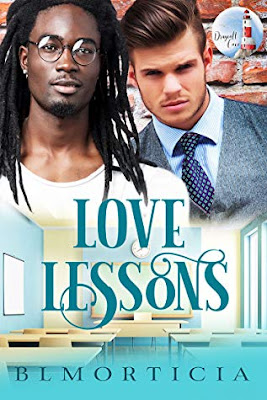 Two men brought together by an annoyingly intelligent child. Moving to Draycott Cove hadn’t been Leander’s plan, but the opportunity of working in a school that didn’t care he was openly gay was too good to pass up. Leander was raring for a new start in a place that was off the grid. He knew loneliness would set in, but that’s what hobbies and his hand were for. Thorne grew up and married before discovering that a straight fairy tale life wasn’t for him. After separating from his wife, Thorne had no intention of marrying again. Humble and unselfish, Thorne was happy to raise their son, Roddy, alone. Men like him didn’t deserve love – no one wanted a dumb jock. Thorne didn’t expect to be bowled over by Roddy’s sexy god of a teacher. He pledges to coerce Leander into his bed, hoping he’ll accept his flaws and past. More importantly, will Roddy tolerate Thorne putting someone on a pedestal along with him? Not all lessons are easily learned.

Love Lessons is the second book in the Draycott Cove series. This book is an opposites attract interracial romance novella between a teacher who loves frilly things and a jock who can charm the pants off of anyone and is parent to a cute little kid that makes everyone smile.

BL Morticia's Love Lessons, the second book in the Draycott Cove series, is a sweet and tender read.

After Thorne and Leander meet with a cute airport mishap, Thorne is relentless in his pursuit of Leander, who happens to be his son's teacher. It's a story of secrets and some kinky lace.

I definitely enjoyed Leander and how well he's described physically, but it took me longer to become as invested in Thorne. My favorite character was young Roddy though. He's just funny and cute. I always enjoy stories with young kids.

I very much appreciated the way the author explored Thorne's secret. It's a serious issue, causes great shame, and yet is completely avoidable. Thorne is definitely a sympathetic character as this point and you can't help but to root for him.


Love Lessons is romantic and feel good book. This BL Morticia tale is perfect when you're in the mood for a warm, comforting read.