RELEASE BLITZ & REVIEW - The Family We Make by Dan Wingreen

Spencer Kent gave up on love a long timeago. As a twenty-eight-year-old single father with a fourteen-year-old son, Connor, he knows his appeal to the average gay man is limited, and when you

factor in his low self-esteem and tendencies towards rudeness and sarcasm, it might as well be nonexistent. But that’s okay. A man is the last thing Spencer needs or wants.

Tim Ellis’s life is falling apart around him. After four years of hard work at college, he finds himself blacklisted from the career of his dreams by the professor he refused to sleep with and abandoned by the boyfriend he thought he was going to marry. Even though he was lucky enough to land a job at a bakery, he still feels like a failure.

Tim and Spencer’s first meeting is filled with turbulent misunderstanding, but Tim makes a connection with Connor through a Big Brother/Big Sister program, and both men put aside their mutual dislike for his sake. By letting go, they may help each other find their way into a life they never could have imagined.

Wow, The Family We Make is one hell of an emotional read by Dan Wingreen.

Spencer became a father at the age of 14. A new teacher at the high school, he discovers his son Connor is being bullied. Spencer's a great character. He's hysterical and his parenting skills leave a lot to be desired. But his struggles with his son leave him uncertain and insecure.

Meanwhile, Timothy has a smothering mother who makes him feel like a loser. He's younger than Spencer, but they become friends when Timothy becomes Connor's big brother. I love the representation of the youth center and the big brother program. As well, I appreciate that Tim respects Connor's privacy. This part is exceptionally well done.

From the title, it's obvious this story revolves around family. And boy does it. There are many facets of family that are illustrated, most importantly the fact that family is what you make of it.

This story tackles many serious issues. The struggles of being a father at the age of fourteen. The struggle of being so close in age to your child. The struggle to support your child on their own terms. It also deals with the bullying issues of both children and adults, as well as the problems administrations have when it comes to bullying.

Told in 3rd person pov, the author manages to fully capture Spencer and Timothy's emotions, as well as Connor's, which are well explored and super intense. The characters are so darn lovable, leaving me wishing I could know these people.

The bullying moments are horrific, constantly bringing tears to my eyes. There are many different things related to this that had me so damn angry. But it in the end, I had a smile on my face with how it's resolved. Sort of.

And as for the sex scenes, their first time, when it finally happens, is tender, sweet, and oh so hot!

My first read from Dan Wingreen, I am super impressed with The Family We Make. This touching slow burn romance is very well written and intriguing throughout. I look forward to reading more from this author.

The Family We Make

“What do you want, Jamal?” Spencer Kent asked, not glancing up from his phone as he furiously tapped the screen. Commanders of Warfare 3, a Four Square clone where people built up a character
and “conquered” real-world locations, was his latest obsession, and he was so close to reclaiming his rightful spot as the Great General of Laurence Tureaud High School from the little prick who kept taking it away from him. Whoever CaptainSpock77 was, Spencer knew he had to be a student, because he never knocked Spencer off during class. It was always right before school or during
sixth period—which he assumed was the bastard’s lunch period—and Spencer was determined that this would be the day he’d vanquish his foe forever.

Still, even with most of his attention focused on glorious conquest, he couldn’t help noting that being able to recognize one of his new students by the sound of their voice six days into the new school year was never a good thing. Spencer once had a dog who’d, according to his parents, gone through three different names before he finally remembered to keep calling him Avery. Personally, he doubted the accuracy of that story, but he’d be the first to admit he was pretty shit at remembering names unless the person in question was a Bringer of Stress.

“If I didn’t do the essay, but I still read the story, do I still get credit?”

Spencer stifled his first exasperated sigh of the day. “No, Jamal.” He winced as his commander lost half its health bar. “The whole point of the essay was to show you read the book.”

“And how am I supposed to know that if you didn’t do the essay?”

“You could trust me?”

Spencer didn’t have to look up to know there was a cheeky grin on the kid’s face. He could sense it.

“I could also throw myself in front of a train. Doesn’t mean it’s a good idea.”

A decent number of kids chuckled. “That’s cold, Mr. Kent.” Not as cold as the icy ball of despair that will form in the chest of CaptainSpock77 when I win this battle. “My pops says all this literature stuff is bullshit anyway, and I ain’t never gonna use it in the real world.”

“Language,” Spencer droned. “And your dad’s right. You aren’t ever going to use anything I teach you outside of this class unless you decide to study literature in college. But. You’re still inside my classroom for the rest of the year, and until then, you need to do the work you’re assigned, or you’ll be right back here next year doing the same—son of a bitch!” he finished with a hiss as his commander fainted, and two adorable, blushing anthropomorphic ambulances carried it off on a stretcher.

How the fuck did I lose? I had it!

The bell rang, signaling the beginning  of first period, and the end of Spencer’s noble crusade to free the school from tyrannical bondage. It took more effort than he’d care to admit to keep from
throwing his phone at the wall. Fucking mobile gaming was going to kill him.

What kind of shitty algorithm picks a school as a command center anyway?

Spencer glared up at Jamal. The kid standing in front of his desk was ridiculously tall for a fourteen-year-old, and Spencer was a short man who liked to keep his chair as low to the ground as possible, so some of the intimidation factor was probably lost. Sure enough, there was the cheeky smirk.

“Class,” Spencer called out, not even trying to keep the growl out of his voice. He was pleased to see a few flinches from the more perceptive and easily rattled students. “Be sure to take the time to thank Jamal for the surprise quiz you’re going to be taking today.”

There came a chorus of groans and some scattered “fuck you, Jamal’s” he decided to ignore. Jamal scowled, but Spencer merely raised an eyebrow and pointed at his assigned seat toward the back of
the room. “Unless you want a desk closer to me, I suggest you take your seat and get out some paper. I’m thinking this test will take the form of an essay question.” He raised his voice. “Hopefully, the rest of you got some practice writing essays over the weekend.”

His words were met with another louder round of groans. Spencer smiled to himself.

Spreading the misery rarely failed to improve his mood. 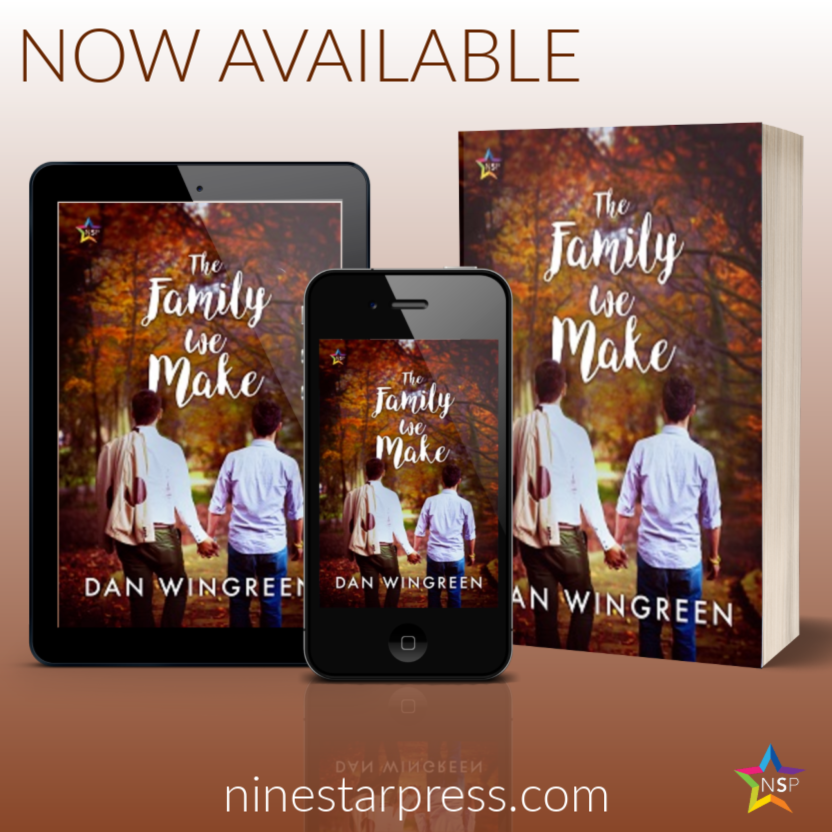 
Dan lives in Ohio (as people do) with his husband and the most adorable little rescue dog ever. His three favorite things are The Empire Strikes Back, winter, and RPGs. His least favorite thing is pizza. Since the age of twelve, it’s been his dream to write something good enough to get published and, after over a decade of unforgivable procrastination, he actually managed to get it done. Thankfully, what he finally ended up writing turned out much better than the Spider-Man and Eminem fan fiction he wrote in sixth grade. His new dream, which will hopefully take less time to achieve, is to own two Netherland Dwarf bunnies named Bunnedict Thumperbatch and Attila the Bun. You can find Dan on Twitter.