Dancing with a Star (Shore Thing #2) by Grace Kilian Delaney 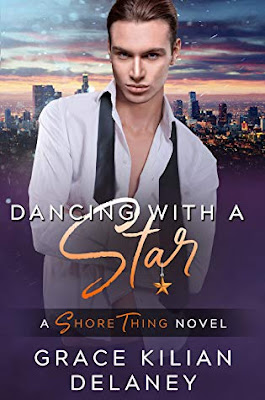 "You had my heart as a boy, and whether you realized it or not, you’ve kept it all these years."Androgynous fashion model Quinn Bouchard knew this day was coming. Hours before one of the most important photo shoots of his career, his wife asks for a divorce—a divorce they had agreed upon before exchanging vows—causing upheaval in his otherwise happy queerplatonic relationship. As if the day wasn’t hard enough, Quinn learns Xander Engstrom, his childhood best friend now a movie star, is part of the photo shoot, and their reunion awakens something Quinn hasn’t felt in years, leaving him sure of only one thing: he needs Xander back in his life.Movie star Xander Engstrom has regrets, and the epic fight spread across the tabloids between him and his ex-boyfriend—an addict that won’t leave him alone—is the biggest. To control the damage, Xander agrees to an interview and photo shoot with a well-respected publication where he meets Quinn, the first boy he had a crush on. Xander’s pathetic, romantic heart falls all over again for his long-lost friend. The only problem is the type of relationship he’s thinking of isn’t possible with the stunning model.Living on opposite coasts and worlds apart, they navigate through months of coordinating schedules, the whims of a finicky film company, and nights in hotel rooms to spend time with each other until secrets force them to choose between a future together or letting their pasts tear them apart.This friends-to-lovers, slow-burn romance contains implied sexual abuse, one photogenic gargoyle, and discussions about cannibalism.

Can be read as a stand-alone book as Quinn’s story starts before Julien’s in Living on a Dare (Book One) and ends a year later.

Ahhh, Grace Kilian Delaney's second book in the Shore Thing series, Dancing with a Star, is a fabulous read.

Quinn and Xander are two former best friends who are reunited on a photo shoot. Love these guys and their complexity. Quinn's an androgynous model who's in a platonic polyamorous relationship with two women that is about to end in divorce. It's complex, and it's wonderfully explored. This is definitely something unique and worth a read. It's full of intense emotions that truly help drive the story, and is handled with care.

Xander meanwhile is a movie action star. He's super lovable, but he's been burnt by his controlling ex Todd. And to say Todd was controlling is an understatement. That man is trouble with a capital T, as he's extremely abusive and manipulative. Honestly, this part isn't heavily explored, as the emotional impact isn't mentioned much, thus keeping this a lot less heavy than it could have been.

Quinn and Xander's relationship is extremely slow burn, as most of their story is about life and character growth, rather than romance. Their developing friendship is impressive in it's honesty, and the slowness to become lovers is fantastically natural.

The careers are both men are explored nicely, shedding some light into the world of the famous, both the good and the bad.

This story is heavy on the serious topics, so read with some warning. I love the complexity, and the moments of light humor that soften things up. A story build upon character development, this story needs some of those lighter moments.

Dancing with a Star kept me intrigued and entertained throughout. The characters are interesting, leaving me wanting more of them. I'm impressed with the way Grace Kilian Delaney explores different kinds of love, relationships, and sexuality, and I highly recommend this book.