Rules to Live By (The Lodge #1) by Quinn Ward 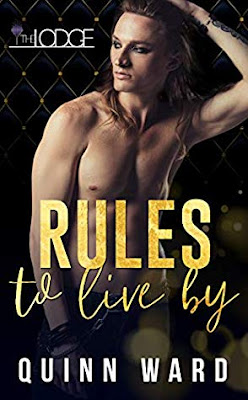 His life may be falling apart but he's not looking for someone to fix it.
Or is he?
Slade's not at rock bottom but he's close. His band split up, his bank account is empty, and his best friend went and fell in love.
As soon as Jack saunters up behind him, Slade's immediately on edge. Jack is fancy suits and expensive whiskey, while Slade is dive bars and cheap beer. Besides, why would someone who owns a kink club be interested in a wreck like him?
Slade doesn't want to crave Jack, yet he can't bring himself to disobey his demands. He knows Jack can give him rewards he never dreamed of...
Structure.
Hope.
Love.
Jack might be in charge, but it's Slade who holds the power. In order to get what he needs, he'll have to accept Jack's help.
Note: Rules to Live By is a dual-POV book featuring a brat who's not used to following the rules and a workaholic businessman who may be too committed to the success of his unique kink club. The Lodge series will follow the growing popularity of this club as well as the men who make it run.

Quinn Ward's Rules to Live By, the first book in The Lodge series, picks up with men we've met in previous Quinn Ward books.

Slade and Jack are two complex men who desperately need one another. Poor Slade's floundering, barely living. Meeting Jack changes everything. A natural caretaker, Jack is immediately there to help Slade with his issues.

The result is some hot sex, a great Daddy relationship, and the start of a Daddy/little dynamic. It's great. The age play ends up being that of a middle instead of little, so take note if that's not your thing.

The character growth is fantastic. Slade comes alive again, and gains a new sense of calm and order as a result of Jack's help. Then there's Jack who comes out of hiding. He's never been in a relationship, hides away in his office, and is a Dom without a sub. Seeing him succumb to the sassy Slade is fantastic, as this is everything Jack has avoided in his life, but is exactly what he needs.

I love the way the author explores the mentality behind age play. The calm and peace that it brings to the little/middle. As well, the Daddy play heavily focuses on the needs of the sub, including Slade's need for rules. Love it.

Rules to Live By is a fantastic read. I love this Quinn Ward story and can't wait to see what comes next for this group of friends and family. Sam has definitely peaked by interest and I am excited for his story.