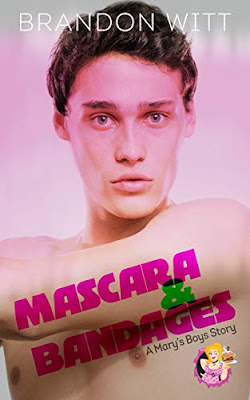 Ariel Merman is a new drag queen who’s already finding a family at Hamburger Mary’s. After a performance as Ariel, Zachary Cooper walks home in his makeup and is assaulted by homophobes. Zachary’s worry that the attack has thrown a wrench in his good fortune is eased when he looks into the eyes of his doctor.Dr. Teegan Chau is a little lost after divorcing his wife and coming out of the closet, but he can’t deny the pull he feels toward the young man he patches up. Luckily, Zachary takes the initiative and asks Teegan out. But attraction is the easy part of their blossoming relationship—as they deal with an ex-wife and child, being a drag queen in a heteronormative culture, Zachary’s lingering trauma from his attack, and Teegan acclimating to life as part of an out-and-proud gay couple.The challenges seem daunting at the start of a romance. Can Zachary and Teegan make it through the rough patches and take a chance on the love that’s been missing from both their lives?

Mascara & Bandages, the third book in the Mary's Boys series, is an amazing story. This Brandon Witt book is best read as part of the series, but could easily be rad as a standalone.

Being a drag queen at St Mary's is what saves Zachary, as being Ariel helps set him free. Zachary is timid, but Ariel is bold and confident. But most important, Ariel is worry free.

Teegan's a doctor who meets the young Zachary after he's gay bashed. Like Zachary, Teegan is also wonderfully complex. He has an ex wife who's actually lovely, and a young daughter. His reasons for being in the closet are well explored.

The attack is a tough read, and the aftermath messes with Zachary emotionally and physically. Both men come with their share of issues, including a whole hell of a lot of doubts and fears. But along the way they find strength and love, as they compliment one another perfectly. There's also some good humor in this story of courage and trust.

Overall, Zachary and Teegan have a tender and sweet relationship. It's a beautiful journey that is full of heat and emotion. There are homophobic parents, with some barbs that left me numb.

Mascara & Bandages, the third book in the Mary's Boys series is well worth a read. Brandon Witt brings all the emotions to the table in this story, starting with the gay bashing incident and ending with a HEA. It's a wonderful combination of pain and suffering along with attraction, chemistry, and love.