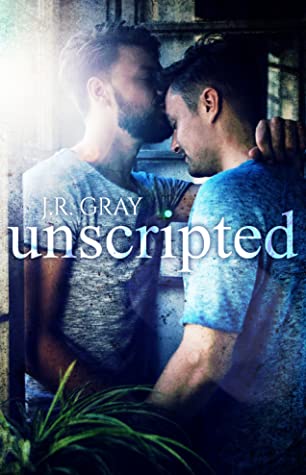 Movie star 101: A smile hides all pain.Quellcrist King has been playing a part his entire life. The more famous he becomes, the more he hides. The only person he ever let see the real him rose with him from nothing to the very top.They were the king and queen of Hollywood— and then she wanted a divorce. The only way to survive his depression is to bury himself in work. If he can be a character, maybe he won’t have to remember himself. A gay role can’t be any different than playing a straight one, can it?But instead of finding solace in the character, he finds it in his costar. Hale becomes his best friend, his lifeline, the light in his darkness. Quell is forced to examine everything he thought he knew about himself while filming intimate scenes with Hale that feel more real than anything ever has before.He’s lived his entire life following the script. What would life be like unscripted?

My Rating - 5 Stars!
JR Gray's Unscripted, the first book in the Unscripted series, is one of those books that had me living in the story throughout.
I love every single second of this book. The characters and their journey are all-consuming. This is a fantastic blend of gay for you and slow burn. It's full of angst, although softened with plenty of humor.
Quell and Hale make for an amazing couple. I love every minute of Quell's journey, although it isn't a easy road. He's divorcing his wife, getting to know his new younger co-star, and dealing with his bisexual desires.
The relationship is wonderfully developed, with everything coming together naturally; never forced. Their relationship has a lot of problems to deal with, including doubts, fears, and acceptance.
I enjoy the opposites attract aspect, as the characters are not only in different places in life, but also their careers and their acceptance of themselves. Together, they naturally fit, emotionally and physically. They play a couple on screen, but  the fun begins when the lines start to blur.
The author's writing is fabulous, with complex characters, a wonderful pace, and am amazingly gripping storyline. The author's exploration of depression is fabulous, written with care and a whole lot of depth.
Uscripted is a must read for fans of closeted movie star romances. I lover every single moment of this JG Gray gem!
____________________________________________________________________ 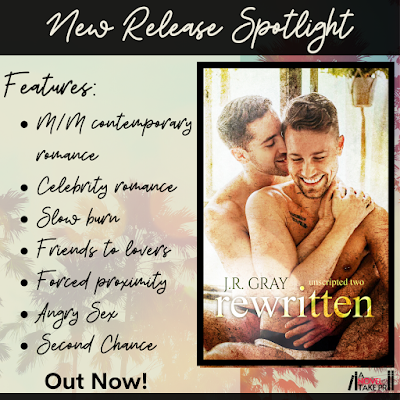 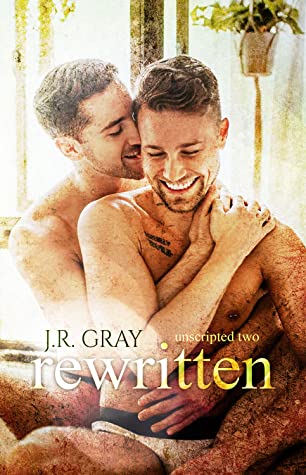 Movie star 102: The headlines are never what they seem. Quellcrist wasn’t new to fame or the effect it had on a relationship. He’d been married in the spotlight for as long as he’d been famous. But that was before Hale. He knew it was going to test him but even he hadn’t known the toll that months apart would take on his fledgling relationship. Long days of shooting, different time zones, calls every day dwindled to days without calls, and rumors were all over the rags. Through it all Quell had to battle his own worst enemy but he didn’t know how to win against something inside him. Depression ate him whole and pain took over. There was so much more at stake than losing his boyfriend, he was losing his best friend. His lifeline, the love of his life. Was there any way to come back from the damage done? Can they rewrite their ending?

My Rating - 5 Stars!
Rewritten, the second book in JR Gray's Unscripted series, is one hell of a riveting story.
Hot damn, I am elated to get more of Hale and Quell. Love these two in Unscripted, and and delighted to get to spend more time with them.
This book picks up where the previous one left off. Quell's divorce is now public, but Hale and Quell are still keeping their relationship a secret. There are plenty of rumors going around, but they aren't confirming anything.
Their story involves paparazzi, gossip news, rumors, and a nine month separation as they film separately. Their future is undecided, and then things go downhill.
Their tale is part happy go lucky, part fear and doubts. It will make you smile, laugh, cry, and want to scream. Quell and Hale are two Hollywood actors, trying to make their relationship work all while balancing their careers and busy schedules. As for the angst when it hits, holy shit, the author drags the reader through the wringer with this one. So frustrating, so maddening, but so damn good.
Quell, himself, is a man who's depression is still front and center in his life. "...I don't know how to be happy because I never have been. But this is close and I want to keep feeling this." His fears are are undoing, and his lack of mental stability is always front and center.
The author's writing style is superb. The tone itself shows the level of excellence. At the start, the tone is perfectly gentle and sweet, with plenty of love and flirting. Later on, the author perfectly changes tone as the storyline takes a downturn. It is amazingly well done.
As well, the author is impressive in writing Quell's depression. The struggles, the effects, the mindset, everything is written with knowledge and care.
Rewritten and the first book, Unscripted, are currently my favorite series of the year. The characters are perfectly lovable and their journey is mesmerizing. 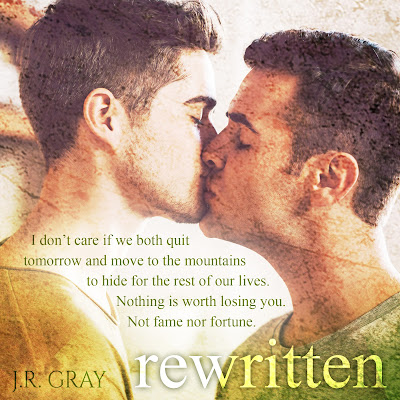 Chapter 1 tease
Hale
“What a morning.” Quell grabbed a robe and slipped it on, leaving it untied as we
headed towards the kitchen.
“What because you’re internet gay or because my dick is being talked about on
TMZ?”
“Both. I really do want to see what they are saying about you.” He started the coffee
pot and turned to lean against the counter.
I already had my phone out and was pulling up twitter. “I have a shit load of tags.”
“They are tagging you in this shit?” He looked a little annoyed on my behalf.
“Oh yeah, and #HalesPackage is trending.” I turned my phone around to show him
and it was back to laughing. “Mark wasn’t kidding. This has turned into a monster.”
“I know what your next birthday gift is!”
“I’m not sure I want to know with that look on your face.” I stuck my phone back in
my pocket and got down mugs.
“I’m going to find the best ones and print them and get them framed for the office.”
I scrubbed a hand over my face. “The sad part is I know you probably will.”
“Fuck yes. It’s the gift that keeps on giving.” His joy was contagious. I wanted to take
pieces of it and save it for rainy days.
I etched it into my memory, knowing I would keep it all close to my heart.
“For you. You should do it for your own birthday.” I took the coffee he set in front of
me and followed him out to our deck.
He took a seat in one of the chairs and kicked his feet up. I sat in the chair next to
him and ran a hand over his shin. This was intimacy. Little moments with him. My heart
ached at the idea of being separated from for so long in only a few days.
“I’m going to dig through this tag,” Quell said, pulling out his phone after smiling at
me.
“Of course you are. Don’t favorite any of them.” I pulled up TMZ instead. I wanted to
see what kinds of things were being said. It was probably the worst thing to be doing but
I couldn’t stop myself. I was curious and I knew it would be eating me alive if I didn’t
“Why not?” he asked, laughing.
“Are you serious? Do you realize that will be top news? If Quellcrist King is faving
thirst tweets about me?”
“Oh… good call. Maybe I’ll wait a few weeks to do that.”
I glanced over, blinking at him. “A few weeks?”
He shrugged, giving me a wink. “We’ll see how public stuff goes.”

About J.R. Gray
Gray is a cynical Chicago native, who drinks coffee all day, barely sleeps, and is a little
too fashion obsessed. He writes realistic and damaged characters because everyone
deserves a happily ever after.
Connect with J.R. Gray: Patreon | Website | Instagram | Twitter - Personal | Twitter -
Books | Facebook | Facebook Group | Tumblr | Mailing List | Amazon Author Page |
Book Bub
_________________________________________________________
Giveaway
To celebrate the release of REWRITTEN, J.R. Gray is celebrating with
an Instagram Spotlight Tour and Giveaway. Check out the hashtag,
#RewrittenTour, on Instagram, comment on any host photos by tagging a friend,
and you’re entered to win e-copies of book 1 in the series, UNSCRIPTED. All
details are here: instagram.com/anoveltakepr
at June 04, 2020