It is a standalone story in the Scandinavian Comfort series.

Scandinavian Comfort is a series of standalone novels set in Scandinavia, sharing the common theme of Hygge. Hygge is a Danish word that is impossible to translate into a single English word. It's a concept of finding happiness in the small things, of towing the middle line instead of always aiming for the top and finding joy in your home and sharing time with your family. In Scandinavia you will find that especially Friday evenings are often seen as Hygge time, where families eat favourite foods, light candles and watch a movie, preferably whilst wearing slippers and pyjamas. Another Scandinavian word that is very fitting to this series is the Swedish word Lagom, meaning 'not too little, not too much’. Just right. This sums up the Scandinavian people in a nutshell.

Live your life well. Not too little, not too much. 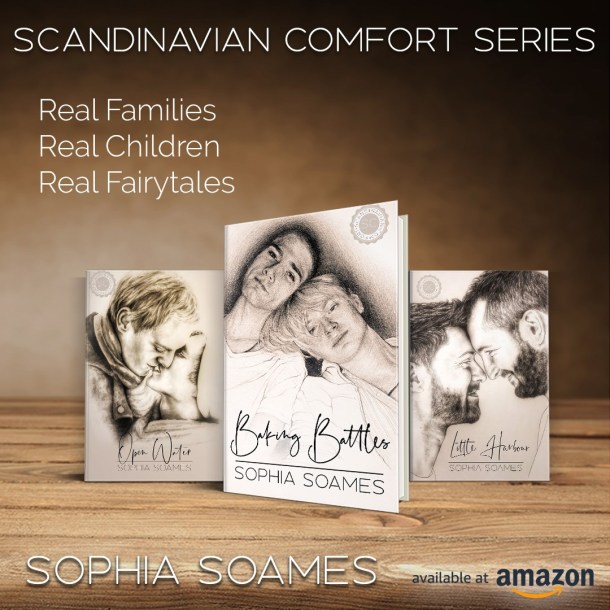 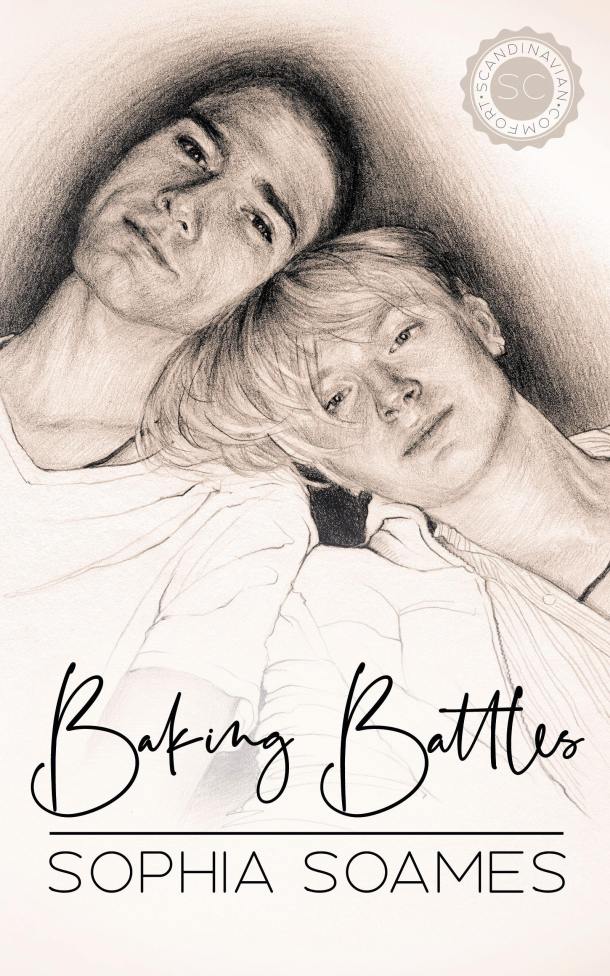 Are you brave enough to stay? Or strong enough to walk away?

Mattias Strømme's life is a recipe for disaster. He is a single dad of a 2-year-old, has an ex-wife who scares him, and a job in finance where he scares everyone else. And now he has been dragged in as a last-minute filler contestant on Baking Battles, the hit reality baking show. Mattias can't bake. He can barely dress himself in the morning, and he definitely hasn't got the skills to charm the viewing public, or the wannabe celebs who make up the rest of the show's contestants. He's not a nice person. He's just... nothing. Mattias left his wife when life became unbearable for him and he fell apart. Now, when he is suddenly drowning in a mess of rumours, male supermodels, and unicorn glitter? Will Mattias be brave enough to stay? Or strong enough to walk away?

Baking Battles, the third book in the Scandinavian Comfort series is another amazingly beautiful book by Sophia Soames.

This is a story that centers around a baking reality show. Mattias is forced to join the show and ends up finding love.

Mattias and Christopher are an interesting couple. They meet when Christopher hosts the show. Christopher's been crushing on Mattias for a while, and lucky for him, Mattias offers him his couch to crash on. Christopher's a model, he's friends with Mattias' friend and he's as patient as can be with Mattias. He is truly a lovable man.

Matt's sexuality is a big factor is their journey. Probably pansexual, he's never been with a man before, but can't resist being with Christopher. He's divorced and helping to raise his toddler. His sex life, or lack thereof previously is well explored and written in a stellar manner.

The best thing about these two is how natural their connection is and how easily it grows. Their journey starts off organically and grows as Mattias learns about himself.

The author's writing style is certainly unique. Sophia Soames has a distinct voice and a recognizable storytelling style. It is not my usually preference, but she excels each time with grabbing my heart and taking me on a memorable journey. Let's just say that each time I finish one of her stories, the book hangover is real!

Baking Battles is a story of family and the many forms it can take. This Sophia Soames read is a tender and loving tale that would make for a superb movie.

“Mattias, I’m in fucking deep shit, mate.” Danijel grits out between his teeth as the glass door to his own office slams shut behind them. He’s a small man, slim with some muscle definition showing under his fitted shirt, which is usually immaculate, but today there are patches of sweat forming under his arms, and his closely shaved black hair is getting frequent swipes from Danijel’s hands, a clear sign that something is bothering him.

“What now? I thought everything was going smoothly? Baking Battles is still well under budget, so financially there is nothing to worry about, unless there is a lawsuit brewing that you are about to hit me with.”

Mattias crosses his arms over his chest. He may have spent years taking shit from Sara, but he’s never been a pushover at work. He knows his shit. So does Danijel.

“Please tell me that you can bake.” Danijel almost whispers. “You brought that chocolate tray thing in a few months back when we had the Hygge-Fridays thing going on? Please tell me it didn’t come out of a packet?”

“It didn’t come out of a packet. Who do you think I am? I’m the master of the chocolate tray bake.” Mattias says cockily. Danijel is clearly in some deep shit. Sweat now pouring down his temples.

He should probably mention that Emilia had drooled in the batter and that the traybake he had brought in was his third attempt, and that the mess he had left behind in the kitchen, sparked off one of the worst screaming arguments he and Sara had ever had. He left a week later. It hadn’t been good. That damn cake brought nothing good with it.

“Mattias, we start filming tomorrow at ten, and we are three contestants down. I am officially pulling you in.”

“What?” Mattias shrieks. “It’s a celebrity special. Who the fuck am I supposed to be?”

“You do that finance segment every year on ‘Good Morning Norway’? You know the ’How to do your tax return?’ thing you did? And... and… You did that thing last week, you know when you talked about how to budget for Christmas without getting into debt? You definitely qualify as a celeb. We will just call you a Morning TV financial expert. Close enough. And anyway, everyone loves a bigwig trying his hand at being normal or some shit? Putting your money where your mouth is, or whatever? Getting down with the underdog? Showing your human side? I haven’t got a clue how we will spin it. That’s PR’s role. They will make it work, if you do this. And, Mattias, you are perfect. You are grumpy and impatient and have a fucking temper on you. It will make fantastic TV. The other good thing is that you won’t have a clue who all the other contestants are, so you won’t give a rat’s arse about pegging them down a notch or two, will you? It will be awesome.”

Danijel is chewing on his thumb. Rocking on his heels.

“Why the hell not? You are single, and the girls will be hanging off you. Celeb status guaranteed. Pussy on tap. What’s not to love?”

“Everything Danijel! Every fucking thing! For a start, I can’t bake.”

“That Chocolate tray bake was edible?” Danijel is smiling now.

“You are a handsome devil. Let someone dress you and get a haircut. Shave. Sorted.”

“I’ve got a reputation to protect. I’ll be the fucking laughingstock of the station!”

“People will love you. Profits through the roof. Spin-off series. I have a clear vision in my head.”

Yeah. Danijel is on drugs. Clearly. Standing there with his arms spread out and a dreamy look in his eyes.

“No, Danijel. Not happening. Baking Battles is this station’s number one show, our main cash cow, and we have been seeding this Celebrity special for months. We can’t just throw random contestants in and expect to pull it off. The public will see right through it. It’s desperate, and it’s unprofessional.” Mattias turns around letting his hand rest on the door handle. He is leaving. He is not getting drawn into this.

“Alima?” Mattias’s hand grips the door handle tighter. “Your sister can’t even peel a potato. She feeds her kids microwave meals and thinks it’s gourmet cooking. She’s going on Baking Battles as a contestant? You are kidding, right?”

Danijel’s pushing it here. Alima is his oldest friend. Well, the only friend that has stuck by him throughout his whole divorce mess. She lives life like she is some kind of hardcore Superwoman, and Mattias bloody adores her. She’s also married with a million kids and works full time, and has never baked a cake in her life. He knows that, for a fact.

“Dead serious, Mattias. She owes me one, and anyway someone has to get voted off in the first episode. She doesn’t give a shit, and we are marketing her as the Norwegian ice-hockey team’s physician, which isn’t a lie.”

“She treated their reserve goalie for a sprained ankle. Once.” Mattias whines into his hands. “Danijel, what the hell are you doing? This is crazy?”

“I have no choice Mattias. Amelia Hammerdahl had to pull out with the cocaine scandal that broke on Friday. Trond Pedersen is up for a fucking embezzling charge, and that rapper we were pinning our hopes on? Pregnant. Couldn’t stop puking through the test filming yesterday. We can’t use her, it is just awful. “Danijel actually looks a bit green himself. “So, we are down to Pablo from ‘Say Yay to the Gay’, Ida Sagnefjord from ‘Frognerfruer’, Paulina Sætermark, the news anchor from ‘Dagsrevyen’…”

“And not Mattias Strømme, a boring CFO,” Mattias says firmly. “Forget it, Danijel. It’s stupid, immoral and downright illegal. We are deceiving the public, lying and betraying the trust of the brand. Get yourself on the phone to casting downstairs. I am sure we have some D-list celeb just dying to make a spectacle of themselves on TV over Christmas.”

He walks out the door letting it slam hard behind him. Fucking hell, Danijel.

Mattias’s life is peaceful and quiet, his job rewarding and fulfilling. His daughter is the love of his life.

He doesn’t need this.

He’s not going anywhere near it. Nope. Not happening. 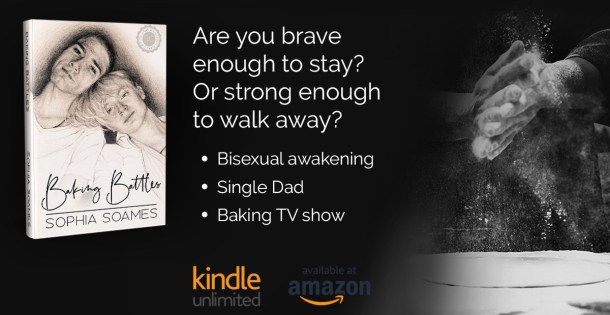 Sophia Soames should be old enough to know better but has barely grown up. She has been known to fangirl over TV-shows, has fallen in and out of love with more popstars than she dares to remember, and has a ridiculously high-flying (un-)glamourous real-life job.

Her long-suffering husband just laughs at her antics. Their children are feral. The Au Pair just sighs.

She lives in a creaky old house in rural London, although her heart is still in Scandinavia.

Discovering that the stories in her head make sense when written down has been part of the most hilarious midlife crisis ever and she hopes it may long continue.

About the Cover Artist

Christina Stern is a Russian based artist. Quick sketches and portraits drawn in pencil are what she likes to do the most. Her work can be found on @christinastern on Instagram 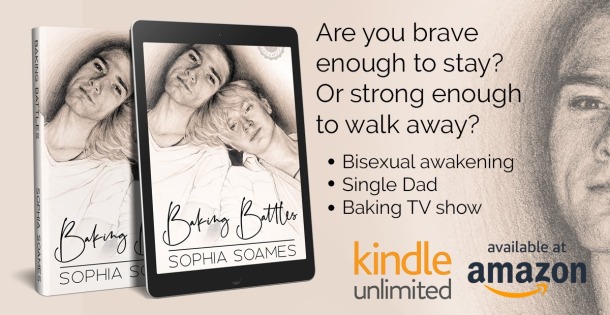 Follow the tour and check out the other blog posts and reviews here
at June 15, 2020