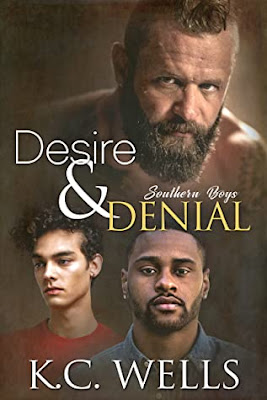 Jon has yearned for a man's touch for as long as he can remember.

Now two younger men are about to bring his fantasies to life.

Jon Walters is a mess.
He's thirty-eight. His roommates are eighteen and twenty. It's never gonna work. But Lord, he wants it to.

He's spent years hiding his sexuality. Denying his desires. Guys don't come out at my age - do they? Except he did come out once - and went right back in again. How does he explain all this to Del, his brother? That's a conversation Jon is dreading. Del is the only family Jon has left, and he's going to be hurt. Angry. Not to mention, there are secrets Jon does not want to share.

And then there's Chaz and Kendis. Wasn't falling for one guy enough of a challenge? I had to fall for both of them? And what the hell do they see in me? Because they're not making it easy for him to say no.

Whichever way he looks at it, Jon's life just went way beyond It's Complicated…

My Rating - 5 Stars!
Desire & Denial, the third book in the Southern Boys series is a great menage romance by KC Wells. Having not read the previous books in the Southern Boys series, I struggled a little bit at the beginning. But, it quickly became easy to catch up.
This book checked all my boxes. It's a fun and flirty romance, full of hesitation, seduction, and some yummy first times. Chaz and Kendis are both inexperienced gays. The older Jon is someone everybody thinks is straight, but he has a secret.
I seriously love this book. It's a story of ever-growing feelings between three men. The slow dance between the men, which includes seduction is a lot of fun. The storyline is riveting, as well as compelling. The characters are all loveable. The conflict is realistic, and never forced.
Their story includes racism as well, as Kendis is black and experienced with being judged for the color of his skin. I definitely appreciate his mother and her contribution to the story.
The emotions are all over the place with this tale, with sad moments, tender moments, and beautiful moments. As well, there are plenty of sweet moments, including Jon's faith in Kendis, as he steps up to help him from the start. Good god, Jon endeared himself to me from that moment on. As for Jon's past, it's well illustrated why he's in the closet. I was almost tears reading his backstory.
Something I found exciting is that this is a menage romance with all three men exploring first times. This is not typical of a romance, and it upped the fun.
Desire & Denial is a nice mix of age gap, boss/employee, roommates, and more. There is something for everyone in this book, including an 18th birthday, a jock strap, and some hot dreaming. Having not read the first two books in this KC Wells series, I am excited to go back and read them.
at June 08, 2020