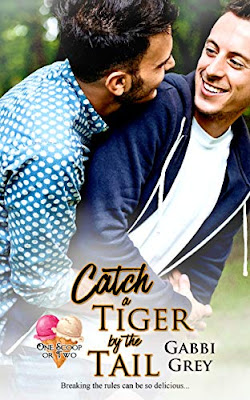 Tagline:  Breaking the rules can be so delicious…

Thomas Walsh knows the number one rule in the film industry. Don't get involved with the talent. But resisting the urge to take the big screen to the bedroom can be hell when the lead actor on the set looks good enough to eat...one slow lick at a time.
Peter Erickson's latest role as a gay man hits a little too close to home. He's still in the closet and secretly grieving the death of his lover. Then an enchanting production assistant catches his eye, and he's surprised by the instant attraction that stirs more than his wounded soul.
When the two men are caught on camera in a very intimate pose, both Thomas and Peter are afraid they've caught a tiger by the tail.

Catch a Tiger by the Tail is one of those books that intrigued me immediately and consumed me throughout. This Gabbi Gray One Scoop or Two book is fabulous. I love it all!

Fun from the start, Thomas and Jason are perfect together. Thomas is a PA on a movie set who's dumb struck the first time he sees Jason, the movie star. Jason, oh how I adore Jason. He's a closeted actor who comes with a whole lot of baggage. His ex kept him firmly in the closet and he's never recovered from the pain.

Despite a 14 year age gap, Thomas and Jason can't fight their attraction to one another. Both men have their issues. Thomas is closeted due to his homophobic family, and Jason is still struggling with his past relationship. They also have to deal with outside forces that come with being famous, including the paparazzi.

This is an insta-love Hollywood romance. It's a story of sexual exploration, first times, and coming out. And I couldn't get enough of it.

The writing style flows well, and the storyline is pure delight. Told in alternating 1st person pov, the reader is easily brought into the character's minds and motivations.

Catch a Tiger by the Tail is a sweet and easy going read. This Gabbi Grey gem is angst free and completely heart-felt. These men and their whirlwind romance could be cheesy, but it's not. It's truly delightful!