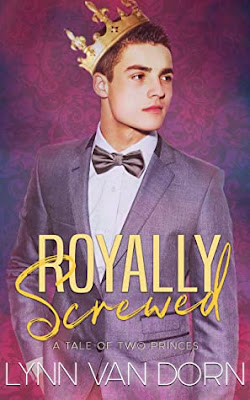 Take one betrothal gone awry…Prince Angelo is destined to marry Prince Yuri. Never mind that Angelo isn’t gay and didn’t choose to be saddled with a moony-eyed princeling who is determined to ruin Angelo’s life. Then one day Yuri goes too far and Angelo has to take matters into his own hands.Add one doomed arranged marriage…Prince Yuri is destined forever to pine after Prince Angelo. Arranged marriages are archaic and awful enough without being stuck for life with someone you want who will never, ever in a million years want you back. Still, for someone who claims to want nothing to do with Yuri, Angelo is surprisingly possessive.And you just might get one unexpected romance.Two men, thrown together by fate and scheming parents, shouldn’t have a prayer of finding a happy ever after. But fate can be fickle, and love can exist where you never thought it could.Royally Screwed is a 75,000-word M/M novel featuring royalty, a poorly-thought-out betrothal, one prince in need of a firm hand, a second prince who isn’t as straight as he always thought, drunken texting, bickering, practice kissing, odious British nobility, and falling in love despite all the reasons why you shouldn’t.

Lynn Van Dorn's Royally Screwed is everything I want in a royal romance. This book is amazing!

Angelo and Yuri were betrothed to one another in utero. Theirs was to be a marriage in name only, but Yuri wants a real marriage. With Angelo.

Yuri's attracted to the handsome Angelo, but Angelo has always dated girls. Until one word changes everything. "Sir."

What follows is one hell of a hot read, with spankings and thongs. It's a story with betrayal, lies, and scandals, along with some great twists and turns. This royal world is filled with some far fetched villains and mischief that keep things interesting.

This is a gay for you tale with sexual exploration, sexual awakening, and the act of coming out. As for Angelo and Yuri together, they make for a unique duo. One certainly wouldn't expect them to fall in love, but it works and it's pure sweet and steam combined.

The writing is fabulous, with two wonderfully intriguing characters and one heck of an entertaining storyline. The author adds in a lot of banter and humor to keep things fun, along with some light angst. It's a perfectly lovable read.

Royally Screwed is a delicious GFY read. You can't go wrong with this Lynn Van Dorn tale that's fun, flirty, and has plenty of sex.