Just My Luck by Alice Winters 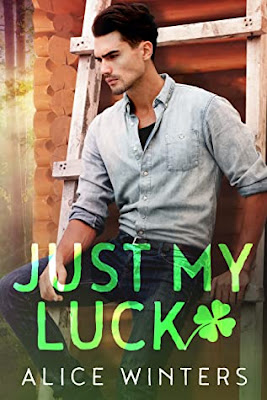 When I’m tossed into the trunk of a car, I realize that what little luck I have has finally run out—especially when I find that Tony, the man who’d abducted me, is planning on using me to get back at my father. My chances for escape look pretty bleak when I’m handcuffed to Tony’s bodyguard, an intimidating man named Shepherd who apparently loves tight shirts and seems to be amused by making my life miserable. Soon, though, I learn that Shepherd has a heart and a brain. And sometimes, those two things can be a bigger weapon than anything in a time like this. I just have to learn how to wield them.

After Shepherd gets me away from Tony’s men, I discover that he’s a survivor, a fighter, and the only person who seems willing to help me when it feels like the whole world is against me. At first, I’m not sure if I can trust the man, but the more we get to know each other, the more I realize that he’s funny and kind of sweet. He’s determined to protect me, but he doesn’t know all of my secrets. He doesn’t know that Tony isn’t the only one looking for me. But together, as we face betrayal and taking down the worst monster of all, we’re determined that we will be the lucky ones after all.

Just My Luck is a 101k book that includes a dog that wants to eat Killian’s face off (or maybe just play with his shoe), handcuffs used in a disappointing way, way too much running, a hero that can’t hit the broad side of a barn with a gun (which might have something to do with the fact that he picks up a book instead of practicing every chance he gets), a game of strip checkers that doesn’t go as planned, and two broken souls who find peace in each other.

Just My Luck is another fabulous romance by Alice Winters.

With her usual snark and banter, she has once again crafted a lovable romance that will leave you mesmerized.

Killian is taken hostage by Shepard. What follows is a hilarious series of barbs and chatter between the two men. Dear lord, I love the banter and wise cracks.

Shepherd and Killian are amazing together. Both men are survivors with so much love to give. They deserve one another and I am so happy they found each other. The differences between the men are fantastic. One comes from a world of money and privilege, the other has been on the streets. And both are far too familiar with pain.

Their story is funny and sad. It's an adventure for survival, with a connection developing along the way. There are some good twists, witty banter and an adventure filled with love, secrets and lies. And Bear, the dog, who is just waiting to eat Killian is a spectacular addition to the fun. Omg, I love Bear!

All told from Killian's first person pov, this slow burn romance will keep you intrigued and entertained throughout. Damn, I love the way Alice tells a story. There's always a large dose of humor that lightens the danger and action, of which there is plenty. Her use of flashbacks in this tale is well done and adds tremendously to the strength of the story, as the reader slowly understands what has shaped Killian.