The Dangerous Art of Blending In by Angelo Surmelis 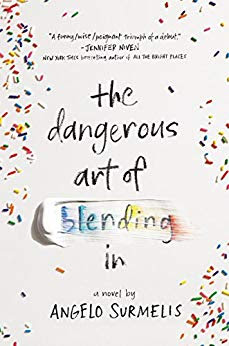 A raw, powerful, but ultimately uplifting debut novel perfect for fans of Aristotle and Dante Discover the Secrets of the Universe from debut author Angelo Surmelis.
Seventeen-year-old Evan Panos doesn’t know where he fits in. His strict immigrant Greek mother refuses to see him as anything but a disappointment. His quiet, workaholic father is a staunch believer in avoiding any kind of conflict. And his best friend, Henry, has somehow become distractingly attractive over the summer.
Tired, isolated, scared—Evan finds that his only escape is to draw in an abandoned monastery that feels as lonely as he is. And yes, he kissed one guy over the summer. But it’s Henry who’s now proving to be irresistible. Henry, who suddenly seems interested in being more than friends. And it’s Henry who makes him believe that he deserves more than his mother’s harsh words and terrifying abuse.
But as things with Henry heat up, and his mother’s abuse escalates, Evan has to decide how to find his voice in a world where he has survived so long by being silent.
This is a powerful and revelatory coming-of-age novel based on the author’s own childhood, about a boy who learns to step into his light.

The Art Of Blending In is an amazing young adult story by Angelo Surmelis.

This is not an easy read so please be aware before reading. Evan suffers a lot of physical abuse, in addition to the vile verbal abuse.

Evan is a seventeen year old gay boy whose family will do anything to beat the gay out of him. His mother is by far, one of the worst examples of a mother ever. She belittles him, threatens him, abuses him physically and verbally, even repeatedly telling him that he should die.

So how is a young man supposed to deal with this? His friend Henry is the only one who he can even think of admitting the truth to, but even that will have bad consequences.

Evan's story is full of obstacles, as he cannot keep living with this level of abuse. He needs to get away from them.

The Art of Blending In is powerful, poignant and completely unexpected. Angelo Surmelis pens it with thought, purpose and empathy. It is definitely worth the read!