Anthony Beretta inherited the family winery at the tender age of twenty-four. It’s a struggle to keep it up, but he loves it and is determined to make it work even if it kills him. That is, if a motorcyclist doesn’t kill him first. He initially judges the man, attractive as he may be, on the basis of his appearance and apparently limited vocabulary. He soon discovers he’s wrong, but by then Oscar Kennett has already judged Anthony on his appearance.

Oscar thinks Tony Beretta is uptight and snobbish, and Tony’s speech for the charity they’re working on together reinforces that, even when he finds out Tony did it just to push his buttons. His adorable curls and sexy glasses might not be enough to change his mind, but maybe there’s more to Tony than meets the eye.

In Vino Veritas, by Sydney Blackburn, is a fun read, which is what I have come to expect from her.

Anthony, who finds himself in charge of his family's winery after his father's sudden passing, is in a rut, working too many hours and without a social life. Then he meets Oz.

Oz is a great character, fun of snark and sass, along with being smart. He's the complete opposite on Anthony, who is self-conscientious, awkward and nerdy. Seeing them together is special, as Oz helps Anthony with his confidence and allows him to find his true self, in addition to helping him to live again.

Anthony and Oz work wonderfully together, on many levels. They are fun, adventurous, and amazingly hot together.

The book contains some fantastic banter, along with some misunderstandings, some explosive sexual chemistry, a beautiful vineyard, and a meddling ex. The writing style works great, as the story flows perfectly, the characters are well developed, and the reader will find themselves laughing as well as swooning.

I hope everyone who gives this book a chance will fall for Anthony and Oz as much as I did. In Vino Veritas left me wanting more.

One: Beretta Estate Winery Anthony Beretta hovered in his office, listening to his cousin Katie extol the virtues of their Concord wine.

“It’s a heritage grape,” she was saying, “the kind they make grape juice from.”

Because wine that tasted like commercial grape juice was so popular. Still, there were customers to extol its dubious virtues to, and that was something. Didn’t mean he wanted to meet them, not
over the Concord.

“It makes a great spritzer and is the perfect base for a sangria,” she continued. “Not too sweet, but with a full fruity flavour.”

He had to hand it to her. She knew how to sell it. Then again, Katie loved the winery almost as much as he did.

He moved away from his office door and sat behind his desk, looking once more at the open agenda. The winery hosted events, mostly weddings, and provincial regulations had recently changed. He
had an appointment with his insurance broker in Bayham in little more than an hour. Which was why he was wearing his suit, instead of the jeans, T-shirt, and heavy cotton button-down he normally wore when he worked at the tasting room. He tugged at the lavender tie that felt like it was strangling him.

After checking the time on his phone once more, Anthony cleared his desk and locked the files away. No one else needed to know how shaky the winery’s finances were. He got to his feet and patted his jacket pocket for his car keys.

There was a mirror beside the door, so one could double-check one’s appearance before going to talk to customers. Anthony gave himself a critical look, pushing his glasses up his nose automatically. The mirror showed him what he was—a rail-thin man just shy of six feet tall, with hair that would never look anything other than dishevelled and dark-framed glasses. At least the glasses went some way towards disguising the shadows under his eyes. He looked like an upended mop, albeit a well-dressed mop.

He scowled. He’d much rather be in his jeans and work boots, out with his stubborn Foch vines. Three years ago, he’d put those bastards in, after his father had the gall to die of a heart attack.

His mouth tightened. He couldn’t think of his father without a sour mix of anger, grief, and guilt.

A discordant jangling let him know the customers had left, and he pushed his door open wider just as Katie rounded the corner. “Ant,” she said, “so glad I caught you. Could you pick up some of that
jalapeño sauce from the Mexican store? It really shows off the Viognier. It’s a hard sell on its own.”

He refrained from scowling. Ant was a childhood nickname he’d long outgrown. His name was Anthony. She was right about the Viognier, though.

“I don’t suppose you’ve thought about giving me Friday off,” she said, her tone rising at the end of the sentence, but not quite enough to make it a question.

He stifled a sigh. “And you’re not asking Leigh to switch with you because…?”

“Because it’s her wedding shower. Jesus, Ant, pull your head out of your ass once in a while.”

He ground his teeth as he bit back a sharp reply. “Fine. You have Friday off.” It wasn’t like he had anything better to do on a Friday. The tasting room closed at seven. He could catch up on the
paperwork while he ate, and on Saturday, he could spend the day in the vineyard, trying to discover why the Foch vines were underproducing.

“You’re a prince,” Katie replied, but her snark had hardly any bite.

Happy employees were long-term employees, his father had always said. Katie really did care about the winery. She just had a social life. He shouldn’t be so hard on her.

And what about my happiness?

As the owner of the winery, there was no one around to see to his happiness. He didn’t even know what would make him happy anymore.

“Sorry, Katie.” He forced a smile. “Do you mind picking out a gift the estate can give her?”

“Yeah, give me a hundred dollars. It can be from the winery, you, Aunt Rosie, and me.”

“Take it from petty cash.”

He turned to hide his wince. “I’ll take some money from the account while I’m out.”

She hesitated. “The Wine and Song event will go on this year, right?”

His answering smile was forced. “Be careful what you volunteer for, cuz. Keep your fingers crossed the insurance hasn’t gone up too much.” 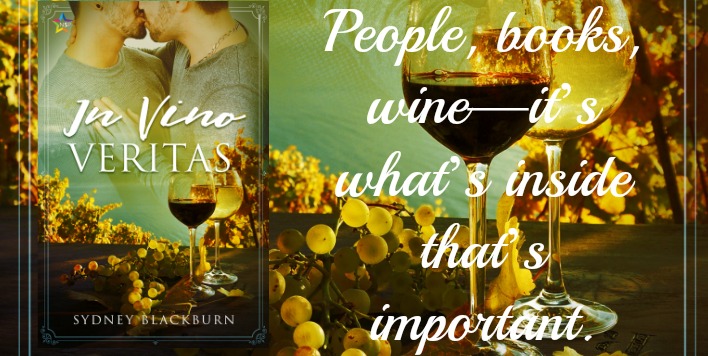 Sydney Blackburn is a binary star system. Always a voracious reader, she began to write when she couldn’t find the stories she wanted to read. She likes candlelit dinners and long walks on the beach… Oh wait, wrong profile. She’s a snarky introvert and admits to having a past full of casual sex and dubious hookups, which she uses for her stories.

She likes word play and puns and science-y things. And green curry.

Her dislikes include talking on the phone, people trying to talk to her before she’s had coffee, and filling out the “about me” fields in social media.

Besides writing, she also designs book covers for poor people.