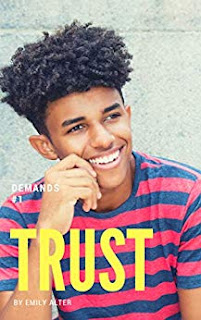 
For a relationship to work, it is not just love which is demanded. Trust is, too.
Elijah is a student who tries too hard, who signs up for everything, and who can't always take the responsibility that comes with it. The new, anxiety-riddled guy ticks all the boxes for Elijah's inner caretaker, but not everyone wants to be taken care of.
Mason's the one who needs perfect grades and gets too anxious at the idea of missing a class. He keeps his gaze down and tries not to attract attention, while yearning for someone to reach out to him.
When Mason is accidentally shoved into Elijah's chest, there's a spark ... and one big problem. Elijah has sworn off relationships in college and Mason wants the real thing. It’s clear there’s an attraction between them, maybe even love, but can either guy learn to trust the other enough to make things work?
Trust is the 1st book of the Demands series. Although they can be read as stand-alones, characters from previous books will make multiple appearances throughout the series.
(71000+ words)
* Content warning: One of the MCs has to cope with the news of a (minor) background character's suicide *

Emily Alter's Trust (Demands #1) is a strong, detailed story of two young men who are both suffering from mental issues.

When Mason arrives on campus as the new kid, Elijah is instantly drawn to him. Elijah can see Mason's anxiety issues, and wants to take him under his wing to help him. This is who Elijah is; a caretaker, who will give and give until there is nothing left of himself.

Mason is equally attracted to Elijah, and interested, but not in the uncommitted relationship that Elijah offers. Elijah has no time to commit to a relationship, but Mason is looking for an actual boyfriend.

Mason's anxiety, panic attacks included, were so well written, with a great understanding of the issue. There are many examples in the book where we can feel everything he's feeling, and it is stifling. Anxiety can completely take control of your mind and body, rendering you useless, and this is perfectly displayed in Mason.

I also found Mason's desire for perfection to be well handled, as it is so darn on par with what I have seen from people first hand. And, even better, is that this need for perfection can be a common issue for people with GAD (General Anxiety Disorder.) His GAD is literally ruining his life, as it is taking away his love of living.

And as for Elijah, wow, he's another perfectly written character. I know someone like him and found his character to be realistic, written with great knowledge and empathy. He just gives and gives of himself, without realizing that he's being pulled in too many directions. He aims to help everyone, and doesn't know what he would be, or who he would be without this trait. In addition, Elijah pushes people away, not letting anyone get too close. Not only is he too busy to devote time to people, he always can't express his feelings, needs, or wants.

Both characters are so tough to read at times, as their struggles affect them in such negative ways.

I have to admit to loving the way Mason dresses and his occasional makeup. Even better though, is that doing so helps him with his anxiety, as when he's comfortable he feels more like he is in control. I wish there had been more of this in the story.

If you can handle a tough read, be sure to check out Trust, as Emily Alter will take you on an emotional journey that is well worth your time.