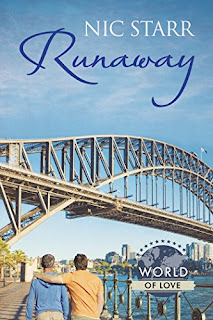 Dr Nathan Powell is ready to settle down near his family, and hopefully find the man of his dreams. He returns to the small coastal town where he grew up, but while life is simpler than it was in the city, there are also complications—like patients’ reactions to an openly gay doctor. And like running into Nate’s first love, Damien, an out-and-proud local business owner who is unwilling to be any man’s dirty secret. The reunion reignites old desire even while it stirs up Nate’s guilt over the way things ended with Damien.When Nate’s nephew runs away, Damien accompanies Nate on his mission to find the young man. The drive to Sydney, and the search of the city, gives Nate time to reconnect with Damien—and to wonder if he made the right decision years ago—when he determined a future for them was impossible. Is a fresh start realistic for two men in their forties? But before he can ponder the second chance they’ve been given, Nate must locate his nephew.World of Love: Stories of romance that span every corner of the globe.

I love a good Second Chance romance, and this one hits all my buttons.  It is sweet, it is romantic, and it's light in angst.

Nate and Damien were secret lovers when they were young. But they parted since Nate couldn't face coming out.  Now, many years later, they are reunited when Nate returns home. And eventually they go off in search of Nate's nephew together, giving them lots of time to talk.

This story deals with coming out, whatever the age may be. I love stories where a closeted man has that part of himself well developed. One fantastic line is "You can't have a proper relationship if you're hiding and not living life to the full." I can't agree with that more.

When they are talking about getting back together, Damien just can't do so, as he can't  hide and pretend to just be friends again. The three years he had to do so before was too much for him. He wants a permanent relationship.

As an added bonus, the locations mentioned make me giddy with nostalgia, since I lived in Sydney for a time and am familiar with all these places. For me, this was just wonderful!!!