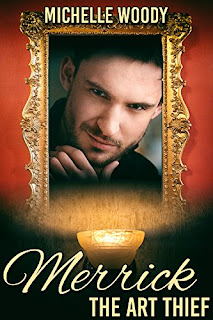 Blurb
Brilliant art thief Merrick Davidson can steal anything, except Grant Silvan’s heart. Merrick has to keep Grant at arm’s length for fear of revealing his secret. When Merrick’s biggest rival exposes his secret to Grant, the rejected lover returns to win back his relationship with Merrick, but there are obstacles to overcome.
Wyatt Silvan, Grant’s father and Merrick’s employer, is after the famous seven Xanderclied paintings, which all contain clues to a treasure. If Merrick succeeds in obtaining all the paintings and find the treasure, he can retire as an art thief and start a normal, uncomplicated life with Grant.
Together, they hunt the paintings from art galleries to private collections, from city to city, dodging bullets and escaping from life threatening attacks. With danger all around and the FBI on their tails, will Wyatt and Merrick find the paintings and treasure they are looking for? Will Merrick realize love is the biggest treasure of it all, before it is too late?

Wyatt is trying to find and protect his father. In order to do so, Merrick and Wyatt will have to face some tough and crazy times, as they are being chased.

This is a story of deception, lies, threats, secrets, suspense, murder attempts, mystery, and romance, all contained within a treasure hunt.

Merrick wants to be with Wyatt's son, Grant, but has never revealed his secret life that he's hidden from Grant, leading to some major problems.

The story is captivating, keeping you on your toes to the end. And in the end, it is a discovery of what is ultimately important in life.

I am happy to have discovered Merrick The Art Thief  and recommend this Michelle Woody story to anyone looking for an action based romance.