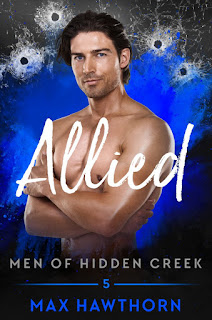 “You have no idea how sexy you are.”

British spy Ethan Barrett was only supposed to be on foreign soil long enough to gather intel on a Houston trafficking ring. But one wrong move lands Ethan in hospital with no memory of who he is, in a small town where he doesn't seem to belong.
Peter Stone is a CIA forensic data specialist. Between his geeky career and the few extra pounds he carries around, his dating experience is zero… until he rescues a mysterious man with a British accent from a car wreck. The chemistry between them feels so real, but Peter can't tell if it's genuine love or smoke and mirrors.
As they fight to figure out who tried to kill Ethan and why, their feelings for each other grow stronger with every passing day. Can they solve the mystery, keep the criminals off their trail, and still find the space between their differences for love?
Welcome to Hidden Creek, Texas, where the heart knows what it wants, and where true love lives happily ever after. Every Men of Hidden Creek novel can be read on its own, but keep an eye out for familiar faces around town! This book contains a nerdy teddy-bear of a virgin, an amnesiac MI6 badass, and one man’s quest to find some damn cheesecake.


Allied (Men of Hidden Creek) is a big old mystery/romance by Max Hawthorne.

Peter is attracted to the John Doe, who they name Jack, but he has no idea who he is, or what he is. Peter and Jack set off to work together, trying to figure out who Jack is.

Their search leads the to finding Jack's multiple aliases. Is he a spy? A criminal? And why are people trying to kill him?

Peter wants to fight this attraction since Jack could be a bad guy. And Jack is fighting the attraction, not wanting to hurt Peter if he ends up being a bad guy.

This story if full of action, mystery and intrigue. These characters are a whole lot of fun together. And it's great watching Jack/Ethan try to remember more of his past.

Allied is a great contribution to The Men of Hidden Creek series, which is penned by multiple authors. Max Hawthorn does an excellent job of bringing the suspense to Hidden Creek.