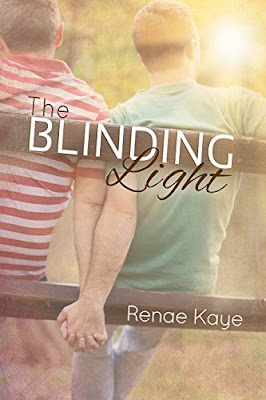 A Novel in The Tav series Davo’s a pretty average guy. He has a decent job, owns his own home, and spends his weekends at the pub. He fully accepts that he’s gay, but doesn’t want to be one of those gays who are girly. He likes football and other masculine pursuits, and firmly avoids anything that could be seen as femme—including relationships that last beyond fifteen minutes. Then Davo’s friend and gay idol not only gets a boyfriend, but also adopts a baby girl. Davo is seriously spooked and scuttles down to the pub. That’s where he meets Lee, cute from her cherry-red hair to her pretty little dress and pointy red shoes. Davo is charmed—but how is that possible? He’s gay. Isn’t he? Then Lee tells him he’s actually a guy—he just likes to wear women’s dresses occasionally. Thoroughly confused about an attraction that’s out of character for him, Davo begins the long journey to where he can accept himself without caring what everyone else thinks.

The Blinding Light, book 2 in The Tav series by Renae Kaye, is downright amazing and wonderful!

I absolutely adore Davo and Lee.

Davo's just a normal guy.  He's accepted that he is gay, but he doesn't want to look femme.  Not at all.  He's a football playing dude who loves to do things that make him appear masculine. And he certainly doesn't want to ever settle down with one person.

Then he meets Lee.

Of course, when he first sees Lee, he thinks that Lee is a girl and he is very attracted to her. Lee's got red hair, a cute dress and very  girly red shoes. But, wait, why is Dao finding himself attracted to a girl if he's gay? It ends up that Lee is a guy who likes to wear dresses sometimes.

This totally confuses Davo. He avoids being femme in any way and doesn't feel comfortable with femme things. So how the hell can he still be attracted to Lee?

And thus begins Davo's journey of trying to figure out how he truly feels and if he's going to allow himself to be with Lee.

The Blinding Light is truly a wonderful book. Davo and Lee men are sweet, loving and just so perfect for one another. This story became a favorite of mine right away when I read it years ago.