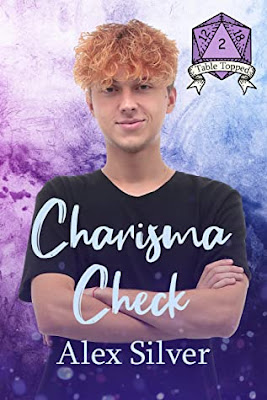 Gui’s the best friend I ever had. I love him like a brother, too bad I’m falling for his little brother.Jude is a walking talking temptation, everything I never let myself want. He’s sweet as chocolate, wickedly funny, and he gets me. The sex, well, it’s worth a repeat and that’s something I never do.When he visited Gui, I thought I could settle for a one night stand, but then Jude moves to my city to work at my studio. Gui gets him to join my gaming group and suddenly he’s all I see. Now Jude’s looking at me with hearts in his eyes and I’m terrified that I’m going to break his heart.Charisma Check is the second M/M romance in the Table Topped series. It features Jude, a hopeless romantic with diabetes who makes animation and Theo, a commitment-phobic trans man with depression who runs tabletop games for his friends.CW: for severe depression, gender dysphoria, mention of past suicidality, surgical recovery, injection medications/needles (insulin dependent diabetes)

My Rating - 4.5 Stars!
Charisma Check is the second book in the Table Topped series by Alex Silver. It's easily read as a standalone. I was immediately drawn into this story.
This is a best friend's brother's romance, as Theo is attracted to his best friend's younger brother Jude.
I appreciate the layers of these characters. Theo's a trans man and I love the way his packer issues and sexual experiences are handled. It's nothing heavy, but well representative of his needs and gender dysphoria. All of this is written in a fabulous manner, with knowledge and care. I appreciate it all.
A large part of their tale is the conflict of Theo's intentions. He's always been one who can't commit, but he finds himself not wanting anyone else either. His backstory is well explored, with his fear and pain well explored. I love it.
As for Jude, he's a diabetic who issues with his health are well illustrated. I appreciate the way the author not only has the character talk about it, but also shows the steps he needs to take when dealing with his health. It's extremely well written.
I expected this book to be super short like Roll For Initiative, but this one is much longer, at 178 pages. Thus it's much more detailed and the author has a chance to add a lot of depth to the story, which is great.
As with the first book, there's plenty of gaming conversations, which again bored the hell out of me, but it's easy enough to skim over those parts.
This is a story of two men who fight their feelings along the way. Two men who are terrified of being vulnerable and letting themselves fall in love. Two men who can't stop themselves from opening their hearts and letting the other in.
In the end, I love Charisma Check. Alex Silver delivers with an emotional and deep read. This tale of two men who have had relationship issues in the past, finding love and strength with one another, is beautiful.
at January 26, 2021