The Fireman's Pole by Sue Brown 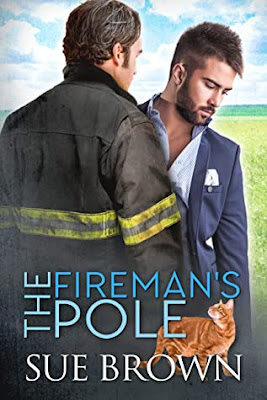 Sparks of passion ignite between the lord of the manor and the hot, new firefighter. But when Ben’s home goes up in flames, will Dale be in time to save his life?Dale runs from the big city to a rural fire station to nurse his broken heart. But he immediately incurs the wrath of the handsome lord of the manor when he knocks over the village maypole.
Ben is used to people avoiding him. But the sexy, new firefighter is not like everyone else. Everywhere Ben goes; Dale is there too, and Ben can’t ignore the magnetism between them.
Will Ben ever forgive Dale for knocking over the maypole? Will Dale wait for Ben to disentangle himself from a relationship he was forced into? Will the villagers, the fire fighters, and the staff at the manor house, stop interfering in their relationship?
So many questions and no time to answer them, as an arsonist’s crimes are escalating, and Dale is worried that Ben could be his next target.

My Rating - 4 Stars!
The Fireman's Pole is a delightful opposites attract romance by Sue Brown. Part suspense, part romance, I couldn't put this one down. From the first sentence, the tone and writing style had me hooked.
The combination of small town, opposites attract, and an arson investigation is well done.
Ben's nobility, a  Lord who owns the whole town. When the tale starts, he has a girlfriend who we know early on is not one he loves. The poor man is closeted and fighting it every day. Upon meeting Dale, he finds himself facing a man worth coming out for.
This is the tale of Dale who refuses to be forced into the closet and the Ben who's never been out. This is a story with a destroyed May Pole, town traditions, and a smart "girlfriend." It's also a tale with a ruthless businessman.
The Sabrina part of this story definitely surprised me. I expected it go a completely different way, and was pleasantly surprised with the way it carried out.
The arson part of the story is a good light mystery, as well as something for the men to work on together.
This book was exactly what I needed when it feel into my hands. It's nothing too deep, something a little bit different, and an easy read. We all need stories like this at times.
The Fireman's Pole is a great read. Sue Brown completely surprised me with this little gem. From start to finish, I feel in love with these men and their story. I highly recommend it when you're in the mood for a sweet, fluffy romance.
at January 15, 2021