A Kind of Forever (Finding Forever #1) by Marie Sinclair 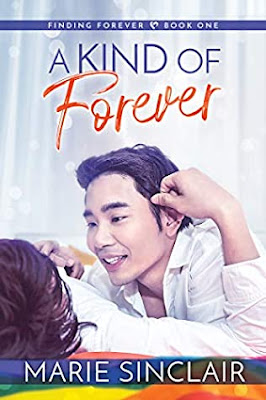 Ry and Cart were inseparable in college: two innocent kids in love who thought they could take on the world. But when a photograph of the two of them at an LGBTQ protest outed Ry to his conservative family, his parents forced him to leave college and convinced Cart their relationship was something Ry regretted.

Since they last saw each other, Cart has moved on. Sort of. He relocated to San Francisco, became a human-rights lawyer, and fell in love again and got married, only to lose his husband to cancer. Still reeling from the loss, he’s devoted himself to the struggling LGBTQ youth center his late husband founded. Then Ry joins the law firm where Cart works. The moment they see each other, Cart can tell Ry’s changed. Gone is the sensuous and enthusiastic lover Cart remembers, and in his place is a man who looks at Cart with disgust. The last thing Cart needs is having to figure out what’s going on with his former lover, but he can’t ignore the strong emotions resurfacing between them.

When Ry returned to his hometown of San Francisco, he knew being near his parents again was going to be a challenge. For twelve years, they’ve been manipulating him with threats of being disinherited and losing his trust fund. It worked when he was younger, getting him to leave college and agree to conversion therapy in the hopes of getting away and returning to Cart. But the camp caused him so much trauma, he can’t even look at another man without experiencing a panic attack. Now his goal is to beat his parents at their own game by pretending to be the dutiful, straight son they want. Two more years, and he’ll succeed. Then he sees Cart again and realizes what really matters to him. He just needs to find a way for Cart to realize it too.


Trigger Warnings: This book contains references to attempted suicide, conversion therapy, depression, and self-harm, as well as depictions of PTSD and panic attacks.

My Rating - 5 Stars!
A Kind of Forever is an emotional and powerful second chance romance by Marie Sinclair.
Way back when, Ry and Cart were dating and in love. Until Ry disappeared without an explanation.
Set in San Francisco, this one is one hell of a read. Ry's past is full of pain and anguish, all caused by his controlling, homophobic parents.
As for Cart, he's now grieving the loss of his husband Sam and helping to save Sam's LGBTQ youth center.
Upon their reunion, the anger and animosity are both intense. What follows is a beautiful tale of regret and forgiveness. It's a tale with family issues, as Ry can't come out to his family. Their story includes panic attacks and so damn many flashbacks to conversion therapy.
In the end, it's an impressive story with explanations, apologies, and acceptance. It's story of trying to deal with one's own past, as well as another's. And I couldn't put it down.
This is a story with plenty of heavy topics and heavy moments. Take note of the trigger warnings and avoid if conversion therapy or attempted suicide is a hard no for you.
The writing flows well, with a great pace. The characters are well developed and their storyline emotional and intriguing. The great thing is, despite all the heaviness involved, the author manages to keep things lighter than one would except.
A Kind of Forever is a stellar read. My first time reading a Marie Sinclair book, I am in love with this one and look forward to reading more from this newish author.
at January 28, 2021