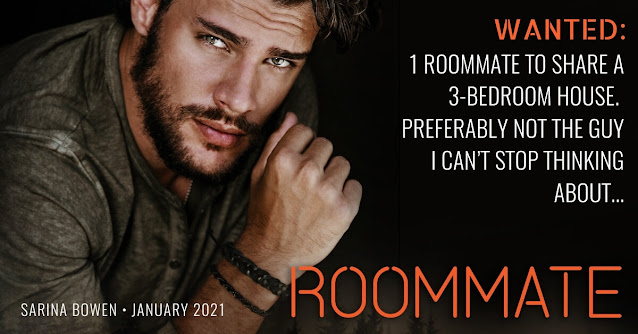 Wanted: One roommate to share a 3-bedroom house, split the rent, and ideally not be the guy I can’t stop thinking about.

I’m a man with too many secrets, so the last thing I need is a new roommate with a sexy smile and blue eyes that see right through me. Eight years ago, Roderick left town after high school. We’re not friends. I owe him nothing. But back then, I let one of my secrets slip, and he’s the only one who noticed.

Part of me knows I should run far, far away. But the other part wants him to come upstairs and spend the night. But if I let him in, I could lose everything.

Seeking: a room to rent in town. I’m tidy, have no pets, and I will feed you homemade bread.

I should probably add: Gay AF, and has no filter. It’s no wonder my new landlord is so wary of me.

A smarter man would ignore those hot glances from Kieran Shipley. The broody lumberjack wants more from me than another fresh-baked pretzel. But if I push my luck, I’ll end up back on the street.

Too bad I’ve never been smart with my heart…

My Rating - 5 Stars!
Sabrina Bowen's Roommate is a wonderful small town romance. I was thrilled to hear she was writing a new mm romance, as she's long been one of my favorite authors.
This book has a lot to love. For one, it's part of the True North world that includes all the Shipley family. Love it. And if you haven't yet read the True North books, fear not; it's easily read as a standalone.
Roderick's back in town, homeless and thankful to be given a chance at the bakery. With Roderick back in town, Kieran is embarrassed and nervous to be around the other man.
It's slow going for these men, as Kieran and Roderick have a messy past. I love the natural progression of things for the men.
Both men are wonderful, and so stinking vulnerable. Each man truly needs the other to heal and become the man they want to be. Keirnan's anxiety is endearing, totally sweet. And  Roderick, poor Roderick, his past is painful, with a life of full of never fitting in, always being rejected.
The family issues for Roderick make for a tough read. He's a man who's never been accepted by his father. His father's always favored Kyle, saving all the complaints for Roderick.
He's  closeted, completely afraid to be out and truthful with the world.
And the sex scenes are a fabulous combo of heat and emotion.
There's something special about the cooking lessons. Not only did these scenes help bring the men closer together, but they are sweet scenes.
And damn, the family secrets and the tension between Kieran and his brother had me riveted. These moments are super emotional.
As for William, the sourdough starter, I couldn't stop laughing. Out starter is named Bartholomew.
It's no surprise that I love the writing style and the tone. The characters are both well developed and their storyline wonderful. And holy crap, the last third of the book had me consumed with every word. Every single moment had my heart beating fast. It was wonderful!!!
Roommate is everything I was hoping it would be. I can't wait to see what comes next in this multi-author small town series. I love everything about this book.
_______________________________________________________________________________ 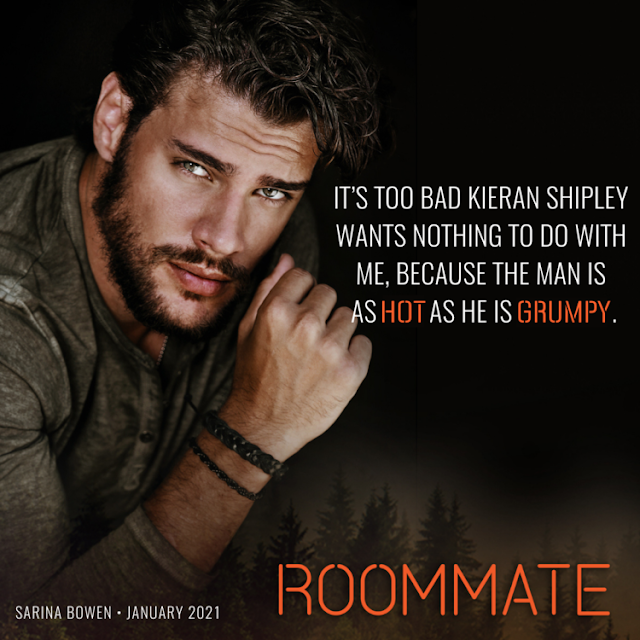 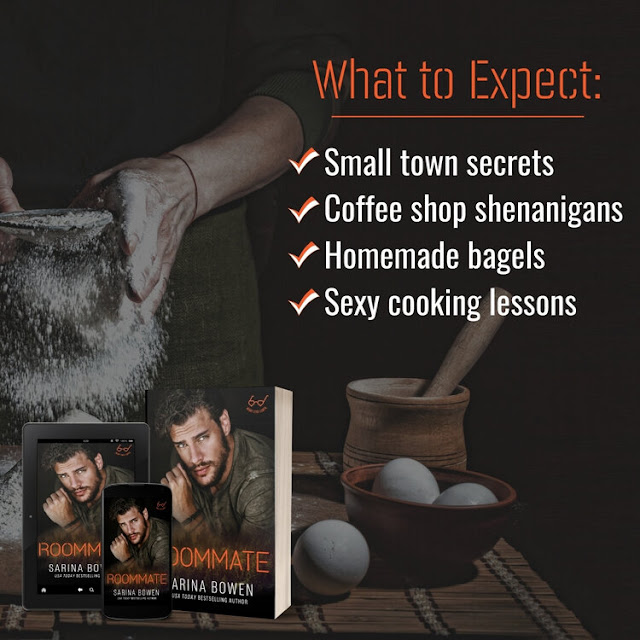 Back at home, I do all the chores and then some.

First I put the cows in the north pasture. Moving cows is easy enough in good weather. It only requires me to move the portable fence and wave them through the opening. “Go on, enjoy,” I say as they file past me eagerly. Our herd is grass fed, and they don’t need to be asked twice. The long, seedy grass and corn stalks I’m offering are like a recently freshened, all-you-can-eat buffet.

Let’s face it—the cows are easier to handle than any of my family members. They go where they’re needed, no questions asked. But my dog—Rexie—gives the cows a nice loud woof just to pretend he’s working hard.

After the cow parade, I close up the fence and turn the electricity on. After that, I spend forty-five minutes raking cow shit out of the lower farmyard in the dark.

It’s boring drudge work, and my mind starts to wander. And, fuck, it wanders right to Roderick Waites—the guy who climbed out of a blue Volkswagen and right back into my brain.

I wish I could say I haven’t thought about him since high school, but that would be a lie. And if I were a more spiritual person, I’d probably interpret Roderick’s reappearance in town as a sign. A wakeup call.

Nobody knows all the tangled things in my brain, but for a split second when I was a teenager, Roderick came close to learning one of my biggest secrets.

The first time I saw him on his knees in front of another guy, it was an accident.

It was autumn then, too. I’d been at a high school football game. It was chilly that night and, last second before leaving for the game, I’d grabbed my dad’s jacket from the hook by the door. After shoving my hands into the pockets while standing on the windy sidelines, I’d found a flask of whiskey. My father must have last worn the jacket when he was sitting out in the deer blind with his pals. Bonus.

But, of course, I’d had to sneak around to find a place to take a taste.

Leaving the crowd and the game, I ducked inside the door to the school’s gym. Under the cover of the bleachers, I drew out my dad’s flask, and unscrewed the top. Just as I raised it to my lips, I froze at the sound of whispered voices. Whoever was speaking had entered the gym at the other end of the bleachers.

Their shadowy figures weren’t easily visible. But I guessed it was a couple looking for a little privacy for a make-out session. And since a couple sneaking off together wasn’t a threat to me, I stood my ground.

I took a swallow of my father’s hooch. My first sip wasn’t life-changing—it burned going down and made my eyes water—it’s what happened next that changed everything.

After screwing the lid on the flask and pocketing it, I ducked out of the gym and into the hallway. Feeling nosy, I walked toward the gym’s other entrance, noiseless in my Nikes. When I reached the door, I eased into a position that allowed me to spy on the couple I’d heard whispering to each other. They were silent now, and I wanted to know why.

When I saw who it was, I swear my heart almost stopped. A varsity soccer player—Jared Harvey—stood beneath the bleachers, bracing his hands on a tread overhead. Roderick Waites knelt in front of him, unzipping Jared’s jeans. 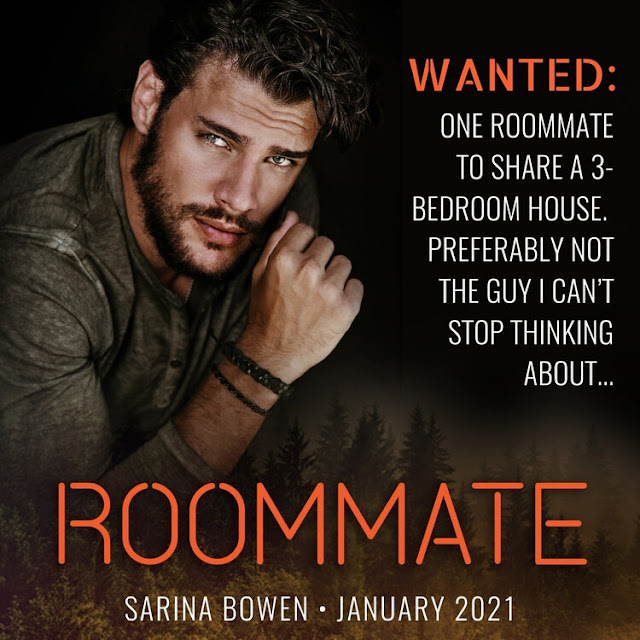 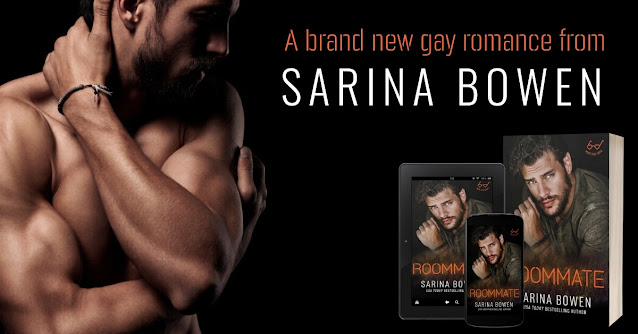