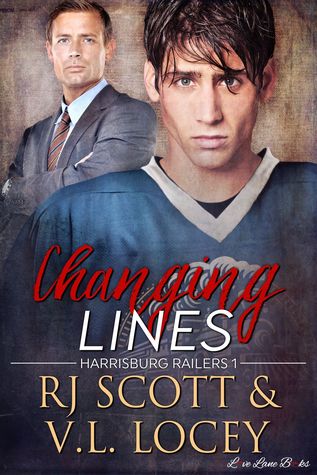 The Rowe Brothers are famous hockey hotshots, but as the youngest of the trio, Tennant has always had to play against his brothers’ reputations. To get out of their shadows, and against their advice, he accepts a trade to the Harrisburg Railers, where he runs into Jared Madsen. Mads is an old family friend and his brother’s one-time teammate. Mads is Tennant’s new coach. And Mads is the sexiest thing he’s ever laid eyes on.
Jared Madsen’s hockey career was cut short by a fault in his heart, but coaching keeps him close to the game. When Ten is traded to the team, his carefully organized world is thrown into chaos. Nine years his junior and his best friend’s brother, he knows Ten is strictly off-limits, but as soon as he sees Ten’s moves, on and off the ice, he knows that his heart could get him into trouble again.
Can Tennant show Jared that age is just a number, and that love is all that matters?

Ten and Jared. Good god, I love them!

I first read this book years ago, and to this day, it's one of my favorites. I absolutely love Ten and Jared (Mads.) I love every single thing about them.

They've known each other forever, but it's been awhile since they've seen each other. And now Ten is all grown up.

I love each man's own journey during this book. Being closeted in hockey is the easy way to go. But, for Ten to come out as gay is harrowing. And the coming out never stops. To teammates. To siblings. To parents. To the hockey world.

The forbidden romance aspect is large with these two. Not only do they think it would be a problem with Ten's family, but they are coach and player.

Ten is one of my all time favorite book boyfriends, but god, I love Jared too. Love him. We learn all about Ryker, Jared's son who's making a name for himself in hockey. The tension between them and Ryker's grandfather is a tough read.

Their story includes fighting their desires, frottage, and so much emotion. Ten's coming out to his parents scene is so damn emotional.

Ten and Mads continue to be one of my all time favorite book couples. And luckily for us, there is so much more of their story to see in future books.

Changing Lines is a must read for an sports romance fans. RJ Scott and VL Locey created magic with this book. And all their fans are lucky that they continued this magic throughout this series and the related ones. If you haven't yet read this book, do so now. You won't be sorry.