Of Secrets and Wolves (Winsford Shifters #1) by Alice Winters 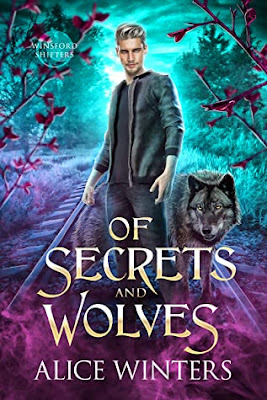 RowanMy whole life, I’ve been taught to despise shifters. So when I’m hired to track two escaped convicts, I’m suddenly thrust into the world I hate—or thought I did. Yet I’m inexplicably drawn to the alpha of the pack whose land the convicts may be hiding on. He’s different than any shifter I've ever met—laid back and quick to laugh, caring and protective, and makes me feel complete for the first time in my life. As secrets are revealed, I start to wonder if everything I’ve been raised to believe was a lie, though it may not matter because it seems like someone wants us dead.QuinnI’m no stranger to prejudice from humans, but it’s different when Rowan comes into my life. Though I shouldn’t let myself be distracted, I’m captivated by him. At first, he’s stiff, fighting to keep his misconstrued beliefs intact, but as I break down the wall he’s created, I’m able to show him a place among the fun chaos of my pack. After one of my pack goes missing, it leaves Rowan and me racing to bring them home, but the only way we’re going to survive this is if Rowan learns to accept the bond that’s growing between us—a bond that could give us the strength to put aside our reservations and give in to what both of us want.Of Secrets and Wolves is an action-filled romance with a dash of comedy. It’s the first book in a series with a continuing storyline and an HFN.

My Rating - 4 Stars!
Of Secrets and Wolves is the first book in Alice Winter's Winsford Shifters. It also happens to be her first shifter book, and it's great.
It doesn't take long for us to meet Quinn, and once we do, the story takes off. I adore the fact that Quinn isn't the typical alpha. And I love the way the two interact.
Soon the tracker Rowan and the alpha Quinn are off in search of the escaped convicts. Their journey includes plenty of suspense about the search, as well as developing feelings for one another. A human and a shifter! Bring it on!
Rowan's been raised to not trust shifters, so his working with one adds to the fun. And I love that they can only fight their feelings for so long.
In an effort to not spoil anything, I don't want to say too much about the actually storyline. But there are some fantastic twists and turns, along the way of this mystery/action tale.
This one isn't quite the humor we've come to know in an Alice Winters book. But, it is still full of humor, banter, and charming characters. There's plenty of one liners and laughs, as well as fur and catnip! And, wow, I love the variety of animals involved.
The writing style continues to be wonderful. Written in alternating 1st person pov, the characters are fully brought to life. The storyline is great, with lots to keep the reader entertained. And best of all, the author excels at writing dialogue. The mystery is well done, with many aspects to it along the way.
Overall, Of Secrets and Wolves is an entertaining shifter romance. Alice Winters excels in her combination of serious moments, action, humor, and romance. As this is an ongoing series, Alice leaves us with a HFN ending, and left me excited to see what comes next.
at January 28, 2021