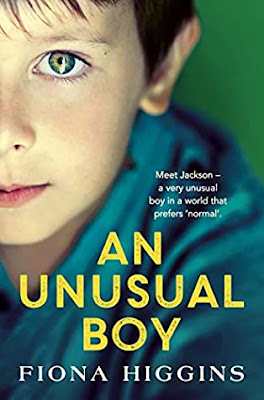 Meet Jackson - a very unusual boy in a world that prefers 'normal'...Julia Curtis is a busy mother of three, with a husband often away for work, an ever-present mother-in-law, a career, and a house that needs doing up. Her fourteen-year-old daughter, Milla, has fallen in love for the first time, and her youngest, Ruby, is a nine-year-old fashionista who can out-negotiate anyone.But Julia’s eleven-year-old son, Jackson, is different. Different to his sisters. Different to his classmates. In fact, Jackson is different from everyone. And bringing up a child who is different isn’t always easy.Then, one Monday morning, Jackson follows his new friend Digby into the school toilets. What happens inside changes everything; not only for Jackson, but for every member of his family. Julia faces the fight of her life to save her unusual boy from a world set up for ‘normal’.An extraordinary boy. The mother who loves him. The fight of their lives.Bestselling novelist Fiona Higgins returns with a heart-stopping, devastating, but ultimately uplifting story about loyalty, love and forgiveness.Praise for Fiona Higgins:'An Unusual Boy' is the unforgettable story of an exceptional child and his flawed but loving family, told with Fiona Higgin's characteristic intelligence, deep empathy and insight.' Virginia Lloyd, author of Girls at the Piano and The Young Widow’s Book of Home Improvement

‘An insightful and sensitively written’ Saturday Age on The Mothers’ Group

‘An enthralling read. Be prepared to burn the midnight oil, as it is impossible to put down.’ Sunday Herald Sun on The Mothers’ Group

My Rating - 5 Stars!
Fiona Higgins An Unusual Boy is an impressive and thought provoking read.
The writing is absolutely fabulous. With the story told from two povs, Jackson and his mother Julia, both characters and their family life are wonderfully developed. And the storyline is one hell of a difficult subject.
Jackson is a young boy with special needs. He lives in his own very literal world. His story, and the way he views and interacts with the world, was a very difficult read for me. I was worried throughout and my heart hurt so badly for Jackson. As a boy often stuck in his own head, unable to communicate fully with the world as a whole, I dreaded where this story was going.
Julia's pov, fully illustrating how all consuming and difficult it can be to raise such a child, is amazingly well done. I appreciate the small moments when she can break through to what he's thinking and appreciate this special child. And damn, one can easily relate to some of her thoughts that if only the other people knew how tough every damn day is for her. And that, damn, it can always be worse.
I don't want to give away the twists and turns. This story definitely gets serious and hits on some harrowing subjects. Go into this story with an open mind, knowing you will be unable to put down this riveting tale. That said, I did want to put it down. I wanted to stop reading because I couldn't take the pain anymore. But I couldn't actually put it down. And I am glad.
I can't recommend An Unusual Boy enough. Every single moment of this Fiona Higgins story is making an important point. Every single moment is telling a tale of extremely important issues, and some of the problems in our society with dealing with children such as Jackson.
at January 20, 2021